(read the following typecast in your best Bogart voice) 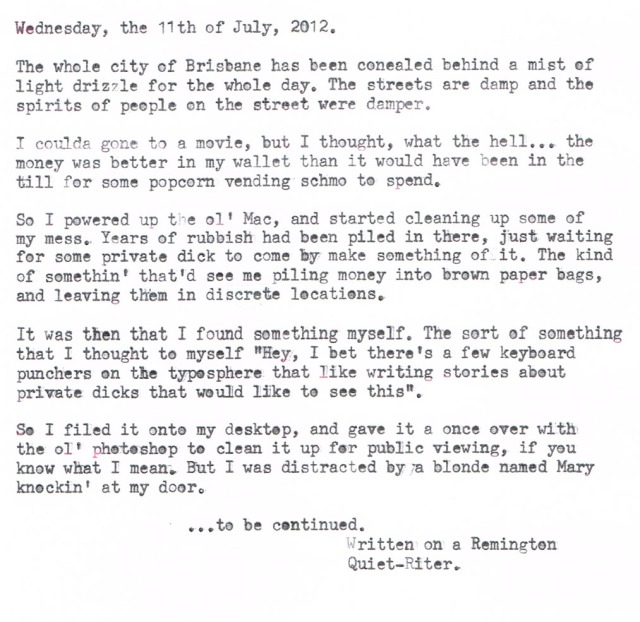 (okay, go back to reading this with a voice that sounds more like Clive James now)
I used to live in an apartment complex in the suburb of New Farm that had quite a culture to it. One of our co-tennants insisted that it felt like ‘Melrose Place’. The rest of us were pretty sure that it was about as close to ‘Tales of the city’ as you could get in Brisbane. Transvestites, quite conservative men in the top floor, odd princesses coming in and out. John the guitar repair guy often strumming his creations late into the night, only to be seen reading the newspaper while sitting on a tiny 60’s garden chair the next morning. Lawyers, PR people, photographers, opera fanatics… we had the lot.
I’m sure you get the picture. It was a bit of drama, a bit of fun, and a whole lot of interesting.
The complex itself was in a U-shape with a sizeable mutual courtyard that nicely lent itself to lots of events and parties. One of those events used to be the cinema nights that I would run from time to time. It was called ‘Cinema Elron’ after the name of the building – Elron Court.
The complex was constructed in the 1930’s to a largely art deco design style. It wasn’t ‘pure deco’ as apartments near by – such as Coronet Court are, but you could never mistake it as being built in any other era. Naturally, on a few occasions we decided that film Noir would be the perfect accompaniment to the building’s interesting and odd history.
While I was stumbling through the disorganised mess that is the hard drive of my Mac, I came across a few of the old posters I had designed. The movies for the cinema night were usually voted on, on the night. But people were expected to nominate films to be chosen from. The first time we did this everyone scratched their heads and made all kinds of confused noises, feeling awkward about nominating a film, as they feared they might be forcing everyone to watch their personal favourite – and everyone would hate them for it. As such I got no nominations.

The first poster was simply just a way of making sure everyone in the complex knew the date, and knew what was going on. That way we could avoid having that awkward moment when you find yourself walking out your front door and finding 30 people on your front step. But after that, the posters started to represent the next cinema night’s theme.
In the time I ran it, Noir came up twice. The first time was when we ran a ‘Modern Noir’ theme, where we tried to get everyone to nominate their preferred post 50’s Noir film. Later, we had another night where we ran a traditional Noir night, looking for nominations for Noir films across the whole spectrum.

I no longer live in Elron Court, and I do miss it in a lot of ways. When I came across these posters this afternoon I thought to myself – the bloggers from pages like ‘Streamlines De Luxe‘ and mike from ‘Just Write‘ – perhaps even ‘Teeritz‘ might find them interesting. I designed these posters myself. And I reckon Teeritz might find one of them somewhat familiar looking,

It also reminded me that I promised a print of my posters to the New Farm historical society. There were a few posters in total. But I felt the film Noir ones might be of the most interest to the Typosphere/writer/typerwriter crew I mostly blog this towards.

Half way through setting up one of my cinema nights.