Good morning. How have we all been? Some of you may have noticed a bit of an absence from this blog, and a long… very long… delay in producing episode 4 of my podcast. Episode 4 is partially recorded, but incomplete.  I haven’t posted on here, or replied to most other people’s posts on their blogs for roughly 4 months, so I’d imagine people feel I’ve lost interest of late. But I assure you it isn’t so.

Then there’s the backlog in correspondence. Mr T in Melbourne and Cameron in California have got partially unfinished letters that are due to be sent to them. Yeah, it’s been well over a year. Sorry guys! They aren’t alone, there’s more I need write to, too…  John in Japan, Alison in the USA, some more for Germany and the Netherlands.

And the typewriters. Oh my! With my silence it would be easy to think I’ve not acquired any more machines to work on. Indeed, an Empire has remained on my workbench in a partially disassembled state for almost 7 months now.

It’s not that I haven’t acquired more machines, but my collecting activity has slowed lately. That said, I do have some crackingly good machines to work on and show when I get the chance. Did you notice the machine up in the title graphic of this page? 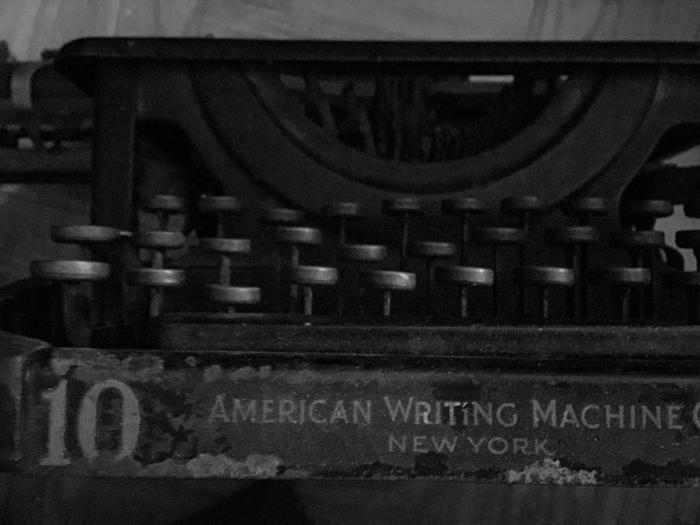 So what’s going on?

Well… to be frank it is a case of being over-committed. It isn’t that I’ve lost interest, even though I find getting out to the workshop to work on machines difficult these days as I tend to be a bit exhausted. Since September last year I’ve been working two jobs. I dramatically reduced hours at one hospital as I took on a role at another. However in the months since then I’ve temporarily stepped back up into my older role and have been taking on extra hours of work at the first hospital. This has left me on some occasions with only one day off a fortnight.

I’m not complaining. I love the people I work with and the places I work, and most of this should wrap up around July. I didn’t have to take on so much, however with my savings account being rapidly vacuumed clean at the moment, i’m motivated to on these hours.

The money is flying out the door due to another big project, well…. event, that is taking up my time.

Yep. After 3.5 years of engagement we are actually going to get married.

Oh yes. Typewriters will feature at this wedding. There’s one depicted on the back of the partially typed invitation. Miss Jane’s passion – Knitting, also features on the invite, and she has knitted part of her gown.

Although we’re living in Melbourne, we’ve added an extra level of complexity by organising the wedding to be performed in Brisbane as it’s Miss Jane’s home town and she has a larger family than I.

As I’m sure many of you know, there’s a lot of work in a wedding. Weddings are a weird time vortex that you voluntary feed yourself into, soon finding yourself crushed in an industry that is a world of its own. Hours can be spent glancing through billions of photos shoved onto ‘boards’ on Pinterest. Magazines, trade shows, photos and photos and photos. Iv’e seen every variation possible of a suit, tie and ‘posing with the blokes’, as well as the millions of poses in wedding gowns. There’s such ‘diversity’! and with so much money being spent by many organising these things, everybody that wants to get in on the creation of the fairy-tale mythology that surrounds weddings tries their hardest to vie for your time and dollars.

Did I say diversity? Whoops. I didn’t mean that. Weddings are by far the blandest cos-play that anyone ever gets involved with. I’m glad that I’m not so young these days that I feel I need to make an impression on the world. There’s a lot of bullshit you can get sucked into. After hours and hours of looking through the photos the industry is happy to present to you, one thing is clear. You can pick and micro-manage the details of a wedding to infinity, but the industry always presents core central themes that you are expected to follow, and are presented as traditions they socially must be obeyed. Everything looks mostly the same, with the expectation that it is little details that you are paying big money for.

What bullshit. We love each other, let’s do the thing and just have a party to celebrate. Oh but I wish it was that simple. With the push by the industry to add ‘traditions’, there’s social expectations from families. Thankfully we’ve eschewed some of them for our own wedding. No big glorious church which in most weddings is merely an extravagant backdrop. No tediously posed photography sessions so we have a depiction of the fairy-tale that we can hang on the wall, and no expensive limousine to ferry us around locations that are a mere 5 minutes away.

And by god, there sure as hell won’t be freakin’ butterflies, doves or any other living creature to launch into the air.

I wish I had the time to work on more typewriters, as I would like to sell a few to prop up the funds for this endeavour. I never like selling something that I know is in the best possible working condition. But finding the solid block of time needed to do this is challenging.

I’ve been Pinteresting and note-taking like crazy of late. My phone runs as hot as my debit-card, and tensions occasionally rise in our house-hold while we struggle to find time to communicate with each other. My work roster has become something of a shambles in the last 8 months as I am working hours that vary from 6:30am starts, with other shifts finishing at midnight. This makes it very hard to find time with each other to just communicate.

So yes, my blog, podcast and other little projects have been pushed aside for these events. I figure that I can make my way back to these when the smoke clears. I’ve taken to using social media, Facebook and Instagram to keep engaged at the moment with my interests, as these are things I can do on the fly as I transit or just relax. So while I’m not bashing out much on my blog, I am still being as annoying as heck on the Antique Typewriters Page on Facebook.

That said I haven’t abandoned all other projects.

One of the reasons I haven’t been writing correspondence of late is that any time and mind-space I have for writing is being used on another long-suffering project that I’m trying hard to finish. Hoping to complete it sometime in the next year, i’m pushing forward, slowly, on my novel – Epiphany. 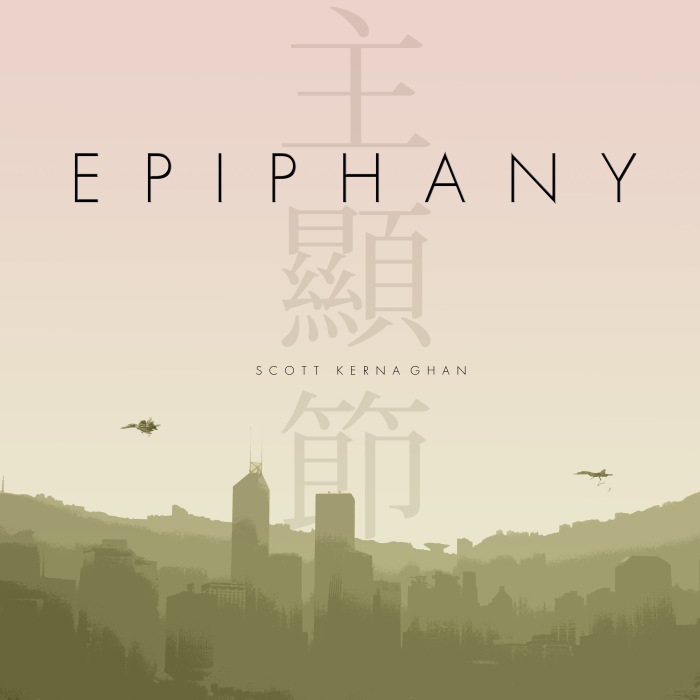 Part of my visit to Hong Kong in 2015 was to research for this novel. While the novel is aimed at the Science Fiction genre, it is heavily laced with politics of our times. The plot encompasses some complex political issues that are topical at the moment – immigration, national identity, the rise of anti-compassion and protectionism which have been dressed up as patriotism.

The idea is to analyse much of what has been happening in Australia in the past 10 years by transplanting the issue to another location and time. It is a technique that other writers have used in the past, with Arthur Miller’s ‘The Crucible’ coming to mind as a strong example. It allows a writer to examine our society as a whole, without engaging with the existing emotions and passions that cloud our view.

But it isn’t simple. Choosing Hong Kong as a base for the story means that I have to pay close attention to the current and developing political and physical landscape of the region. This takes hours of painstaking research. While I work I sometimes listen to Hong Kong and Chinese news podcasts or listen to their radio online. When I have a few moments spare I have been engaging in Chinese Social Media on Weibo. Much of the current political turmoil in Hong Kong has become a major part of the story I am writing, and has allowed me to examine more aspects of Australia’s own political landscape than I ever imagined. I feel as though I am currently torn between three cities; Melbourne, Brisbane and Hong Kong.

Although I need to write faster. An element of the story depicts a major conflict in North Korea that has de-stabilised the region. At the time I started conceiving the plot, Obama was still the USA president, and I was able to get away with saying that Americans were reluctantly being drawn into a regional war. However at 70,000 words in, I watch as a new president directly courts such a conflict, rapidly changing the world as I envisioned it. 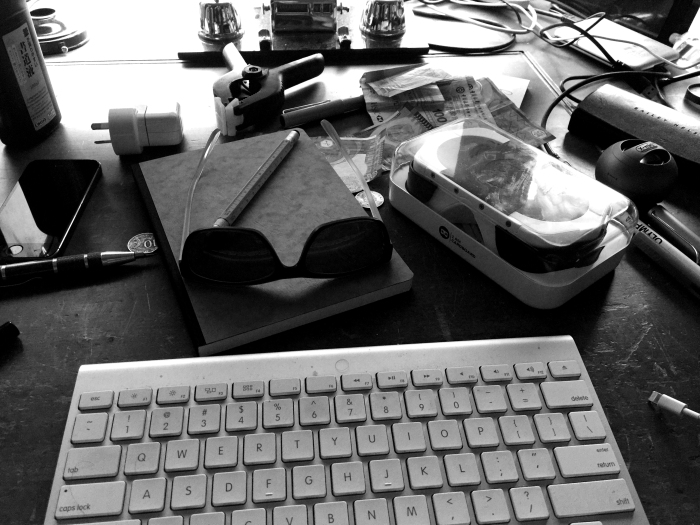 The shambles that is currently my desk. Notebook for the wedding, and ‘I am cardboard’ goggles used for doing virtual-reality street-view looks at Hong Kong. There’s some Australian and Hong Kong dollars here – just because I emptied out a heap of my research bits-and-pieces onto my desk, and left it there. And yes, that is a ‘Monteverde one-touch tool’ fountain pen on the notepad.

This blog and my podcast isn’t dead, but I have a few things on my hands to sort out. So please bear with me while I press forward on a few things, and I’ll be back with you as soon as it all blows over.

As always, thanks for reading.

8 thoughts on “A Very Long Engagement”