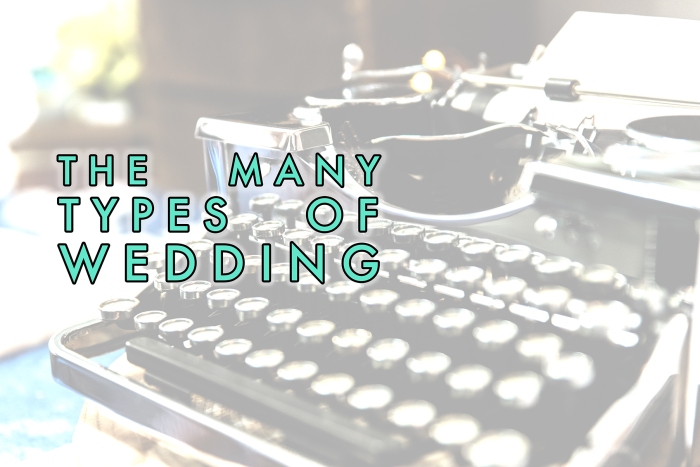 As winter set in here Melbourne, Australia in June 2017, Miss Jane and I were frantically getting ready for an event that… well, we’d kind of procrastinated on for over 3 years. Some members of our families may even consider that 10 years later than it should have been. But hey! We’re not exactly traditionalists.

On new-years day 2017, Jane sat back on the couch with a notepad and said “okay. Let’s get this wedding organised”. At first I thought she was joking, considering how long we’d dragged it on, but by March it became clear she was steadfast determined to go ahead with this, and from there organisation started in earnest. Why not organise a wedding in an almost impossible time-frame when you’ve spent the last 3 years doing.. well… nothing! So the date was set for early July.

The decision was made to hold the wedding in Jane’s home city of Brisbane. Only 2000 kilometres from our current home in Melbourne. She has a much larger family than I, and it seemed far more practical to try and organise my family and friends to travel to Queensland rather than get her family to travel down here. Naturally, this added an additional level of difficulty to the organisation of the event.

Miss Jane’s heart was set on an events hall at the rear of a bowls club near where her mother lives. The place was built in the 1950’s, and little had changed in those years. Indeed, most of the place felt frozen in time. Just perfect for the kind of ‘vintage’ wedding we had in mind.

The problem with saying “vintage” to an events planner is that they look to decorate in the sort of ‘vintage’ that you will find if you type ‘Vintage Wedding’ into Pinterest.com. The trouble with that is that both Jane and I have very firm ideas on what vintage actually means to us. So I ended up ploughing through much of museum of our house to find items to use that would turn the wedding’s design around from ‘Shabby Chic’ to what we really wanted.

Throw in some peacock feathers, and a 1920’s desk set becomes a truly vintage pen-holder for the wedding.

And of course… there we going to have to be a couple of typewriters. Jane had set the theme colours for the event as White, Silver and navy blue. As it turned out, I had two wonderful matching machines that would work perfectly for the ‘guest book’, which turned into an entire ‘guest bar’, complete with stationary that I custom made.

We purchased archival acid-free paper for people to type on, so we could keep the notes and letters typed long afterwards.

With a solid set of pieces from our collection now picked, I carefully parcelled them all up and organised a courier to deliver the items to Queensland. And that’s when the fighting began. They didn’t collect for nearly 3 days, eventually collecting only a few days out from my flight to Queensland. This resulted in some very angry phone calls. In the middle of this occurring, my ‘Stolen Typewriter’ saga occurred.

A friend designed the rings, but their apartment complex caught on fire and they were in the middle of organising a move to Berlin. Jane’s rings were taking a large amount of time, and they informed me that the design I had in mind for mine was probably not possible. Like the courier, the rings also came through at the last minute.

The story was the same for my tailor. I had a suit made. Well, it was again a design of my own – a suit better suited to Australian conditions. High quality marino wool pants, with a full-body waistcoat. I.e. a waistcoat that doesn’t have a silky back piece of thinner fabric, as it isn’t meant to be worn underneath another coat. A week out there were problems. The tailor managed to resolve these ready for me to collect my suit just over 24 hours out from flying. 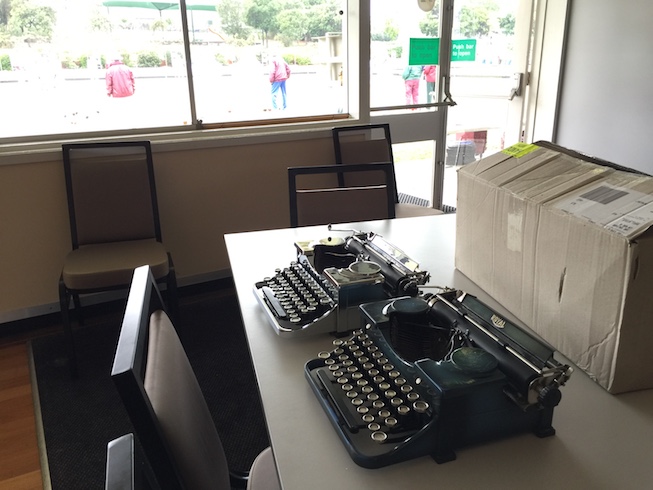 Bumping in to the venue the day before – my typewriters sat over-looked by the bowling green outside.

The night before the wedding a thick fog descended over Brisbane. 80 airplanes were turned away from the airport that night, some of them with guests for our wedding. sadly 5 guests never made it because their flights were cancelled or diverted, and they couldn’t get another flight the next morning to make it on time.

My father’s flight turned around on the runway in Melbourne and almost cancelled, but they returned to the runway and made it to Brisbane, as one of the last flights to make it through before the closed the airport due to it being too dangerous. As an important guest, I couldn’t believe how lucky we were that he got through.

The day finally came, and after many months of experiencing some broad waves of emotion, surprisingly everything went off almost perfectly. Although I’m a little biased, it would have to be the best wedding I have ever been to.

The program I designed.

The actually ceremony lasted mere minutes. Our celebrant, a friend of Jane’s family by the name of Kaye, married us. She’s of the Baha’i faith, and it made sense to have her marry us as our families are an odd and almost conflicting mix of religions.

Bagpipes and drums announced Jane’s entry with a blast that made the bowlers our on the green outside turn and wonder what was happening. The same drums and bagpipes announced our return after we took off with the photographer outside. 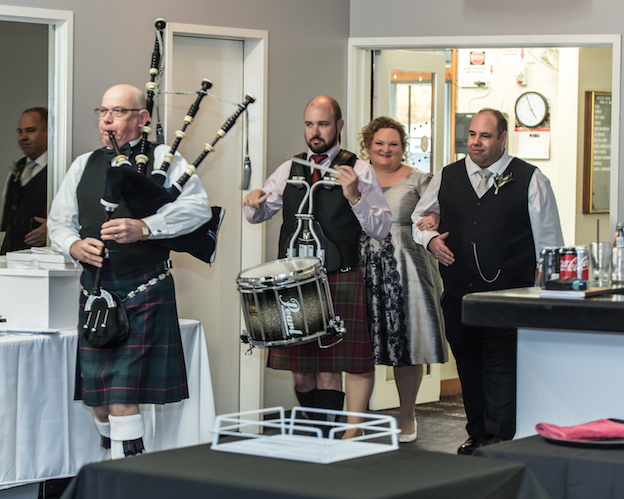 I am in a great debt to Liam and Malcolm for their efforts. They are father and son, however the two men rarely have a chance to play together. Later on they performed a bagpipes and drum duo during the reception, which really set the night off brilliantly.

But what of the cake? Well I’m glad you asked. Again, we tried something quite different. While icing drenched sculptures are de-rigueur at weddings these days, Jane and I had ate enough of sugar-coated garbage fruitcake to last us a lifetime. So we took a different route. We made a cake over the one food we have the greatest bond over — Cheese. 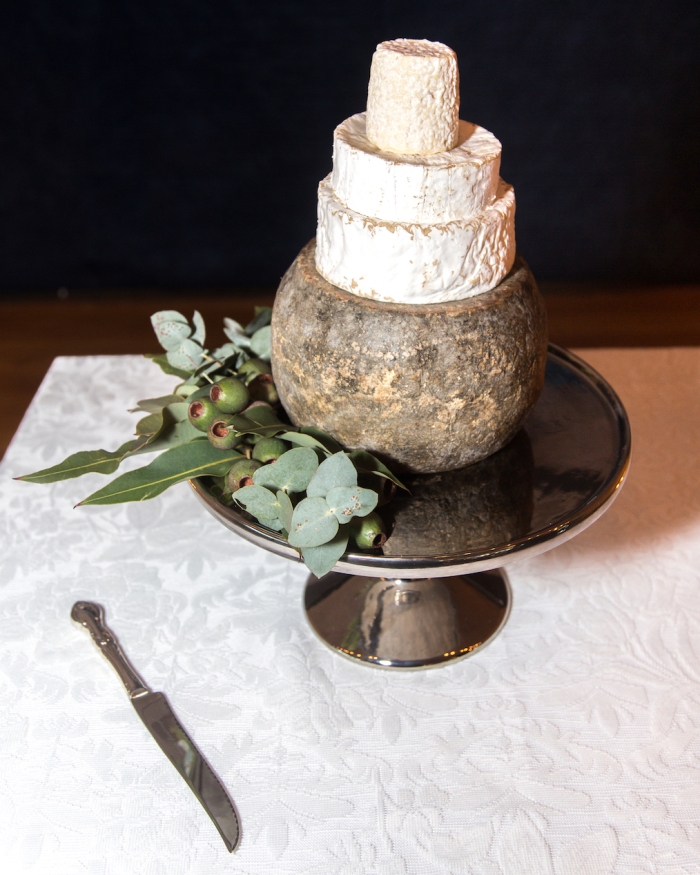 We contacted a specialist cheese-monger here in Melbourne and picked several cheese-wheels. Whereas a regular wedding cake costs you in excess of $1000 for something nice to look at, but usually too awful to eat due to being filled with a generic fruitcake, we we opted for Fiore Di Sardo Pecorino imported from Italy, brie and camembert imported from France, and a rustic Australian goat’s cheese, along with a handful of wheels of local camembert to put out on the tables. Around $600 of cheese – not including the freight from Melbourne To Brisbane

Don’t let the photos fool you. The cake of cheese was larger than most wedding cakes I’ve seen, and it was gone within 30 minutes. No left-over post wedding dregs here.

There was never a minute that the typewriters at the guest bar didn’t have anyone at them, outside of offical parts of the events. At the end around 80 or so pages were typed out, stuffed into the waiting envelopes and left in the box for us to read at a later stage.

Some pages are full from top to bottom with entire families writing paragraphs. Others have brief messages typed on them from several random people. Only a few had short-but sweet messages like this one below:

‘Surfside’ was a ward at the Royal Children’s Hospital in Brisbane that was disbanded a little before they closed the hospital down. On nights when I performed duties as a roving staff-member between wards, I would often sit with the nurses up on Surfside and wait with them until my pager went off, calling me to another area.

I have come to the conclusion that my ‘Royal Chrome’ has become the most over-photographed machine in my collection. There’s hundreds of photos of this machine being typed on by the wedding attendees, and the professional photography only ever took photos of this machine, despite the near identical blue-coloured Royal sitting adjacent to it. The blue machine has the sought after ‘Vogue’ typeface (as you can see in the surfside letter above), and got just as much use, if not more, than the Chrome machine.

It was so glad to have two very special and near identical typewriters that matched Jane’s wedding colour-scheme.

All in all we had a magnificent night. 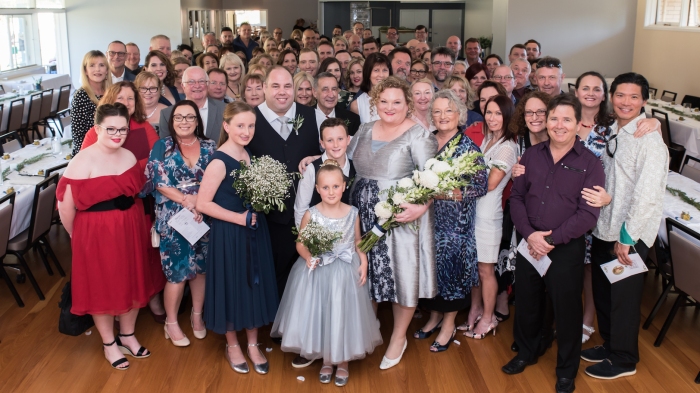 Collector John Lavery left a box with us that he insisted I opened on the night. I didn’t, but afterwards I wish I had. Inside John had left a wonderful gift to us: A Molle Typewriter (1913)

We opened the box the next day while Jane and I were sorting through the letters. I honestly was deeply touched by John’s gift, and it now has pride of place in our lounge.

As I am a gift from my friend, Melanie, who made it from maps of our home towns –  Brisbane (Jane) and Melbourne (Me)

But the surprises didn’t end there.

Sometime later I met with fellow collector and friend, Natalie Tan, while she was down in Melbourne for a conference. We met up for Coffee, and when I arrived at the Cafe, Natalie handed me a heavy bag, saying that this was a gift four our Wedding.

Inside the bag, Natalie who was quite aware of my fondness for typewriters with foreign languages had brought me a very cool Olympia with a Vietnamese keyboard and Character-set. 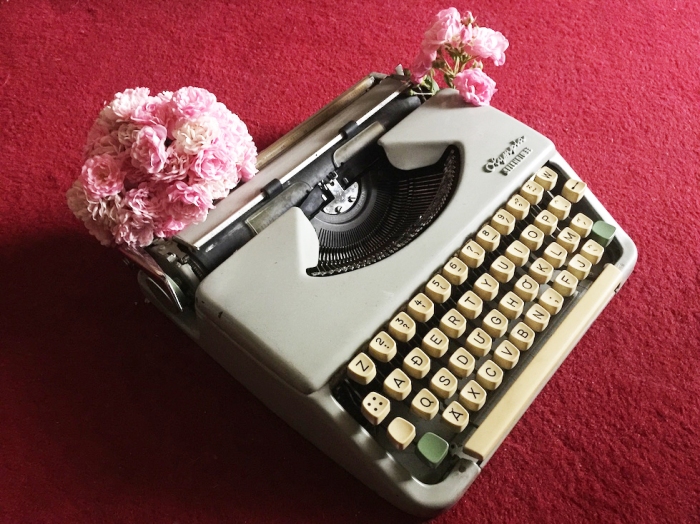 Again, I was so touched by this that I struggled to find a way to express my gratitude to Natalie.

Kaye, our celebrant sent me an email afterwards talking about the typewriters. She had found a photo from one of the leading figures of the Baha’i faith, Shoghi Effendi, at a typewriter on the balcony of his residence. She spoke to me about the photo at the wedding, and I was keen to see what kind of typewriter it was. When I saw the photo I was surprised to see that his typewriter was a Corona 3 on a tripod. There’s few photos of these tripods in use in their era of the 1910’s and early 20’s. And I was excited as it was one I’d never seen before. 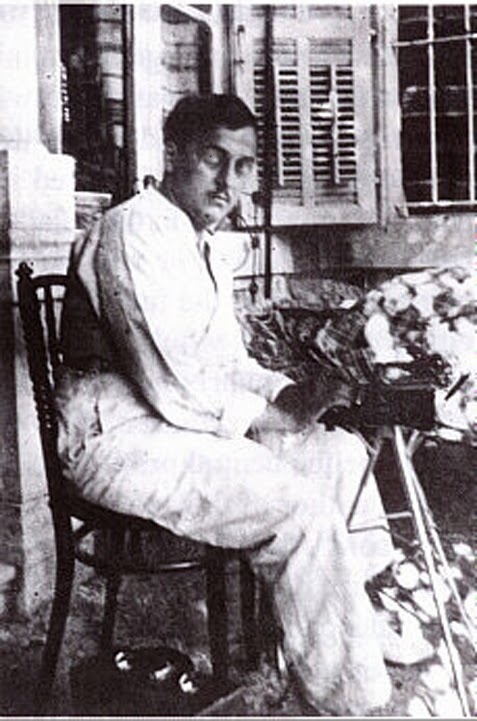 Shoghi Effendi at a Corona 3 and tripod

Shoghdi is considered a guardian of the Baha’i faith, and he wrote many letters to his followers on that typewriter.

I have a rare Corona 3 tripod in my own collection. You can see my blog post on it HERE.

Getting married isn’t going to be an event I repeat any time soon, but I had a wonderful wedding. Miss Jane is now Ms Jane, which doesn’t quite have the same ring, but oh well! At the end of the wedding Jane and I slipped out to a hotel in Fortitude Valley where we got ready for our next adventure overseas, only to find the drama literally arriving on our doorstep at the hotel. But more on that soon on my next blog post.

15 thoughts on “The Many Types Of Wedding.”