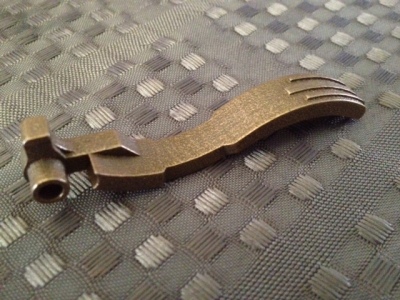 It has been a while since I’ve addressed the question of 3D printing typewriter components. As I’ve so far been the only person to really attempt to tackle it, whenever the topic seems to arise in forums naturally I’ll end up getting an email or a message on the subject.
So I think it is time to discuss the current limitations, as well as what is actually possible. But to do so I’m going to have to take you through some basic engineering and design principals to explain these limitations.
For those who don’t know, during one of my many lives I did a course that gave me a certification that was known as a ‘COS in Engineering’. It was an intense 6 month course that effectively crammed 2 years worth of technical training that you would get progressively while doing an apprenticeship. Most of my contemporaries went on to become toolmakers and engineers. I however went on to become a theatrical stage manager after studying Theatre Technology.
I guess you do what you are passionate about. Anyway, that was another life really.
So I popped out of the other end of this course having done training in machining, technical measuring and quality control, drafting and planning and CNC programming amongst other things. I was always excellent at the theory and the intellectually complicated work. But was crap when it came to the manual machining stuff. So they pushed my study in the direction of looking at a new field in engineering:- Computer Aided Design and Drafting.
I was fortunate. I got advanced out of some of my workshop modules and instead ended up being placed with several senior engineers with Toyota who were receiving specialised training on CADD. Back then the workshop engineers didn’t think much of this CADD stuff, but it was clearly the direction of the future of manufacturing at the time. And getting a grounding in it is important for those who want to use this kind of 3D technology to produce refined and quality parts.
Problem 1: Tolerance.
No, I’m not about to lecture you on peace and good will to all man. But rather about a problem that has faced engineers for hundreds of years. Our current work tools are incredibly accurate. But are only accurate to a point. So when parts are made by engineers, they need to specify how accurately the part needs to be made.
Basically, it is a way of saying that you want the part to be a specific size, but you can allow it to be made a certain size bigger or smaller for it to still be able to work a specified.
If a tolerance is ‘tight’ it means you have very little room to move on the specification. Loose tolerances tend to be wider and less accurate.
For example: The ball bearings on the Royal 10’s carriage rail is exactly 5 millimetres wide. This would be specified as 5.00mm on the plan. However, the tolerance would be about 0.1 of a millimetre, which means that the ball bearings could be made between 4.9mm and 5.1mm in size and still be considered acceptable.
Most of the components made for typewriters after about 1930 however were to much more exacting tolerances. So you would often have a play of much less in size – say, 0.05 of a millimetre.
Think about it. That’s thinner than most people’s hair. We’re talking incredibly accurate sizing that was made by guys using non computer guided tools.
The problem with 3D printing however, is that the technology is currently limited to an accuracy of over 0.2mm. So while this is incredibly small, it isn’t small enough to get the results needed for the really refined parts of the typewriter. Specifically the moving parts that rub, shift and slide against each other.
However, this can be overcome, but requires handing of the parts with some sophisticated hardware afterwards. When I made the handle (displayed above) for the Remington Noiseless, it had to be drilled out post print. This was the only way possible of getting the accurate finish required for the part to work. Other 3D printed parts – if done carefully, could potentially be further machined to produce the accuracy needed. 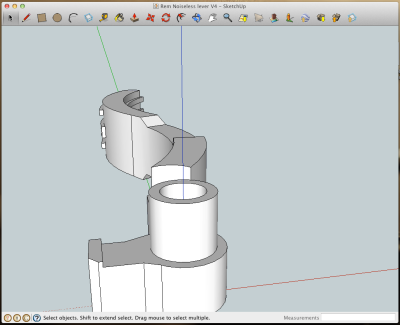 Problem 2: Design.
We are unfortunately in a position where every part that we wish to manufacture requires a considerable amount of reverse engineering. The part may look simple when you look at it, but often there’s grooves and intricacies that were machined into it that we often mistake as being ornate. Those grooves are there for a reason that often isn’t obvious.
The big problem is getting accurate measurements. To do this there’s a plethora of tools that are used. These tools need to be able to measure up to a 100th of a millimetre (some of them a thousandth) and as such they are expensive, and require training on how to use them to get a good result, without damaging them.

The tool displayed in the middle there is a Micrometer, and it is the most accurate of the three displayed here. I used such a tool to get the measurements for the Remington part, and that took me about an hour to get about 12 sizes. And that was off a part that was incomplete, and needed some guessing.
Curved surfaces are difficult. Threads are relatively easy (you use a thread gauge or tap set to check) complex shapes are….. f***ing hard. Wonder why I haven’t popped out a replacement escapement block for the Royal 1 yet? It is a complex shape that would have been easier to design onto the machine already knowing all the angles and measurements required, than it is to measure out afterwards. It is really hard work to get the right measurements that are within tolerance. 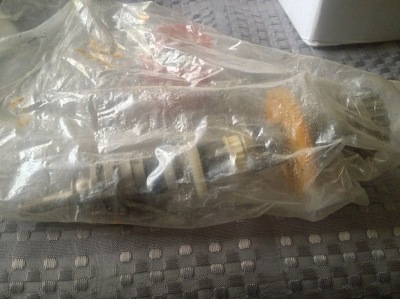 How about measuring up this guy.
And then there’s the gears.
A gear might just look like a disk with teeth, but oh my… there’s a hell of a lot of measurements involved.

There are engineers that specialise in designing and manufacturing gears. I don’t know if I can emphasise enough how hard gears are.
At the moment 3D scanning technology is in its infancy. The tolerances on it’s scanned information are about the same as what the 3D printer outputs. So as you could imagine, a combination of the two could blow your tolerances out by a huge amount – rendering the effort pointless.
There however is a very simple way to bypass this whole process:- work off the original drafts.
The patent drafts don’t usually contain enough information, but the original drafts for each and every part must exist somewhere. Somewhere….. Anyone got a basement full of designs?
Problem 3: Materials.
The ‘stainless steel’ that I constructed that Remington part out of is strong. But it is what we would call a ‘hard’ material. What this means is that the material – while strong, is likely to be brittle when stressed and simply crack and crumble when put to its limits. This is a different definition to hardness than what we are talking about when we are looking at platens. There, we are actually talking ‘more or less tough’.
A tough material isn’t brittle and has give, and flexes instead of just simply breaking. Plastics are tough. Even metals are more tough than hard – depending on how they have been treated.
A typewriter needs both kinds of materials. However, at this stage 3D printing produces only 1 when it comes to metals – hard materials.
But 3D printing isn’t the only weapon we have at out disposal. CNC milling, lathing, shaping and cutting tools are also available to produce objects out of other materials. These methods are also far more accurate and able to cater for our more refined manufacturing needs. But they have a disadvantage – they aren’t actually all that flexible. 3D printers are able to produce complex shapes easily. But CNC gear requires a cutting tool’s route (the part that shapes the metal) to be planned carefully. This makes machining these parts a lot more time consuming and expensive. But once done, you can produce hundreds of thousands of identical parts. Which is exactly what this kind of technology is typically used for – mass production of highly accurate components.
A 3D printer however does some pretty good work with making tough plastics. Even your home based 3D printer can make some great plastics. But because of the layering technique used to print a part, it tends to produce an interesting texture to the item’s surface. As such this isn’t exactly ideal – especially when you need the surface to be smooth for smooth operation.
But then we have the problem of type-bars. 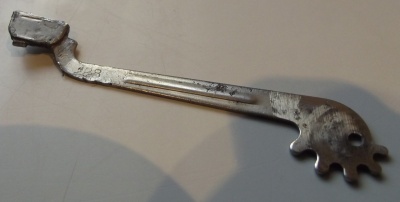 Image from oztypewriter.com
Type-bars are unique in engineering. They have complex shapes (the gears and the slightly turned type-head) that require a lot of accuracy. But they also have an unusual metal structure. At different points on the bar the metal goes from tough to hard. For example: The head that the type stub is soldered onto is hard. This is done by heating that section till it is glowing hot, then cooling it very rapidly.
The middle of the type-bar is typically forged. This is effectively a tough section of metal that is pressed under sudden and immense pressure – this compresses the metal’s atomic structure closer together so that it is even more rigid. This makes extremely tough, while being very hard as well.
Around the gear at the other end of the type-bar needs to be tough. It has to be flexible enough to handle the bounce and the whip as the head hits the platen, but it also needs to be machined very smoothly so that it doesn’t break down over time with friction with enough hardness to resist wear.
In short: There isn’t a machine in existence that will produce a product quickly and easily to replace a type-bar. But with a fair bit of post machining and handling you can get close. Sadly, you won’t be able to forge anything easily.
So is it possible to make a typewriter?
Not including the potential hundreds of hours of work required to measure up and design the parts in CADD software which could be useful in the future – the answer is ‘No’.
Well… sort of. Actually, there is a typewriter design that could potentially be a great candidate for 3D printing with a lot of work. But it will require assembling the parts afterwards and a lot of adjustment.
What is this typewriter you may ask? 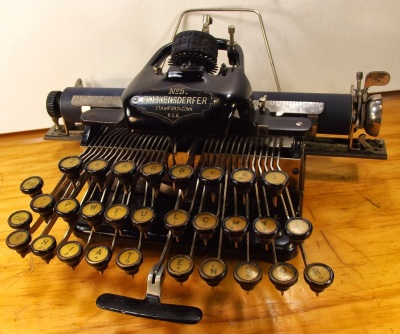 Photo – Oztypewriter.
The (not so) humble Blickensderfer. Anyone up for taking on a ‘Project Blickensderfer’ to see how far we can get?
There’s other issues involved, and really I have only glossed over the issues that I have discussed. There is a whole lot more involved that may need a fair bit of discussion. But all in time. It is about to hit midnight here, and my eyes are drooping.
‘Night.

16 thoughts on “Thoughts on 3D printing a typewriter.”