What is the colour of this typewriter? This isn’t a trick question.

The photo below was taken with my iPhone in my kitchen under 8 x 11-watt high efficiency (fluorescent) light bulbs.

So let’s try this again. Here’s a photo of the typewriter as it was the night the I pulled it out of the box.

That last photo was taken under two of the same high efficiency fluorescent  lights.

Okay. How about we try this typewriter in sunlight. This once again this photo was taken using my iPhone.

Your eyes don’t deceive you. The colour looks distinctly different in this last shot. While it could be claimed that this merely shows of the limitations of the camera, I can assure you that in person the difference in the tone of this typewriter while under artificial light produced from fluorescent globes is distinctly different to what you see in sunlight or under incandescent light.

So I set up my light box with incandescent lights in order to try and capture this typewriter’s likeness and colour. 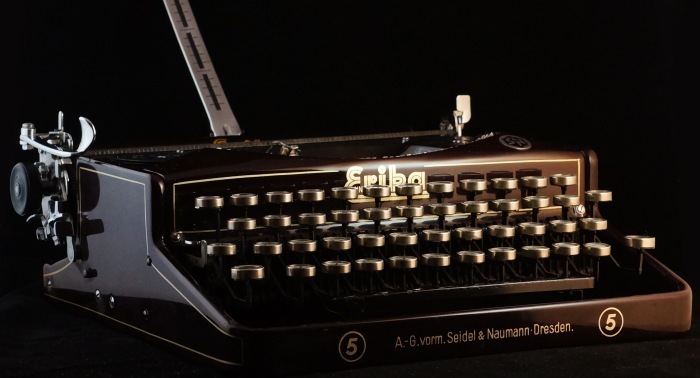 In person this typewriter is quite beautiful. The dark red colour is striking, and the gold pin-striping sets it apart from other machines made at the time. It is an unusually ornate machine that was produced as Germany moved from a war-torn collapsed economy to embracing National-Socialism (NAZISM), and as such is fairly hard to find due to its ‘premium’ treatment. I saw only hints of the colour in the original Ebay ad’s photos and I took a risk when I put a bid on it that it was what I thought it was. These ebay photos had been taken under the same artificial light that somewhat conceals the colour of this typewriter in my photos above As the colour was so hard to discern in the ad, the typewriter was overlooked by other buyers. This surprised me, as I had seen a similar machine sell for 4 times the price a month before. Although that previous ad had featured photos which had the brightness ramped up to try and catch the colour in the light.

This is probably my favourite colour for a typewriter. Which is just as well, as I have other machines that have a fairly similar hue. Oh, and let’s not forget that my car is also quite the same tone. I love this little typewriter to bits, which is probably helped by the very interesting Erika 5 parallel key-top mechanism. This really is a great machine, and I am envious of Poitr Trumpiel’s later model ‘M’ version which can be seen here. However I have yet to ascertain if his machine has the same paint treatment, or is just the same ‘colour’.

The gold pin-striping on this machine in particular is interesting, and is a testament as to why machines decorated like this are relatively rare. The pin-stripe is applied by hand, and isn’t pressed on. This is most evident on the corners of the pin-striping, where you can see the stripe taper down where the person applying it has used a technique common for applying pin-stripe to cars, and has ‘pulled’ the tape so that it breaks off at the desired length instead of cutting it. This is a technique that would have been time-consuming and have required pain-staking attention, and was not suitable for mass-production.

With that said, this machine had one more big surprise in store for me as I attempted to assess what was creating the unusual colour-shifting phenomenon: Under a black-light there turned out to be an even greater change of colour to be observed.

Under the black-light, the typewriter glowed bright green. 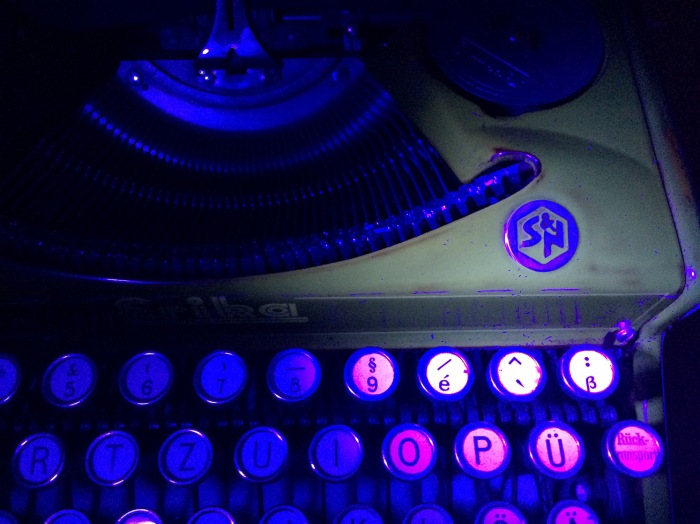 While this might be dismissed as interesting party trick, putting this machine under a black-light actually gives us an insight as to what is happening with the paintwork on this typewriter. Have a look at this next photo and you may notice that some sections of the paintwork isn’t glowing, but rather shining up as the original maroon colour.

Note the visible markings down the left of the machine?

What this implies is that the green glow is only coming form the clear lacquer coating that was put on over the top of the original typewriter’s colour coat. This is something which is common in automotive paint, but not so common on typewriters. The coat appears to have imperfections where it has been applied thinly, which implies that only one coat was added. As such that single coat has worn off easily in places, near where the typewriter’s user would have brushed against the machine’s cover-plates frequently. You can also see on the earlier ‘glowing’ photo that there have been chips of this coat knocked off the space bar.

This is an expensive way of finishing this typewriter, but simply having a clear coat isn’t what is causing this change of tone in differing light. That effect is actually the result of something else that has been added to this coat – Phosphor.

Phosphor is an interesting material. It is what gives the paper we use in the modern world its brightness, and it allows us to produce things highlighters, and day-glow paper, plastic and fabric. Phosphor reacts to ultraviolet light, and under a relatively low intensity of UV it produces a greater amount of light than is actually shined upon it. It is what was used in all of those glowing toys that we used to have as kids, and is all around us in abundance.

The effect is so powerful, that the light produced by common fluorescent lights doesn’t come from a glowing wire as per incandescent lighting, but rather comes from the phosphor that coats the inside of the glass lighting tube. Inside those tubes there is a small reaction that produces UV light, which in-turn causes the phosphor inside the tube to glow brightly.

As such, all light coming from such artificial lighting is completely devoid of UV light, as it is all used up by the phosphor coat – which in turn doesn’t produce any further light in the UV spectrum.

The phosphor in the clear coat of this typewriter is doing something quite similar and is reacting with the UV light in sunlight to give it something of an extra glow – which in turn gives the typewriter its deep and rich burgundy look. However under fluorescent light, there simply isn’t enough UV to produce this effect and as such leaves the typewriter looking almost black in that light.

So there you have it! The mystery of the colour-chaning typewriter is solved.