This year I’ve made some fairly dramatic moves in my life. Along with moving back interstate to my former home town of Melbourne, I also quit working at the Royal Children’s Hospital in Brisbane where I had worked for the previous 5 years. However it wasn’t just myself that left the RCH – everyone did this year. The hospital closed its doors in November after operating on the Herston road site for over a 120 years.

Late 2013, knowing that myself and Miss Jane were soon to finish working at the hospital, I started to take photos of much of the structure and the artwork inside of it. I often worked what was called a ‘pager duty’ shift – a shift that required me to walk around with a pager, where I could be called upon to fill a staffing gap in any department that needed someone urgently in the evenings. Occasionally when I had a moment where I wasn’t madly running between wards, I would stop and try and get some photos of the hospital at night, while the hallways were clear and patients wouldn’t lurk into my photos (and thus violating their right to privacy).

When the RCH closed in November it was a bitter-sweet moment for Miss Jane and I. Both of us had spent countless hours heavily involved in the transition planning to the newly constructed hospital. And while both of us had quit months before we, both still felt sad that we weren’t there to see the transition through. Jane had been part of the planning and design of the new hospital, with her infection control expertise, while I had conducted the furniture, fittings and equipment auditing that provided a foundation for the hospital to plan what equipment we needed to still buy, along with what could be transported to the new campus. Both of us had devoted many hours to this planning process.

The art of the RCH.

Over the years the Children’s Hospital progressively developed into an environment that was designed to be more welcoming to children. As such almost every wall in the building featured artwork that gave the building a bright and friendly feel.

The entry way to many wards were an explosion of colour that often would very young children walking back and forth looking at all the creatures and shapes that could be found on the walls.

Most of this was painted by an artist that I often would talk to during breaks. However I only ever knew her name as ‘Belinda’. 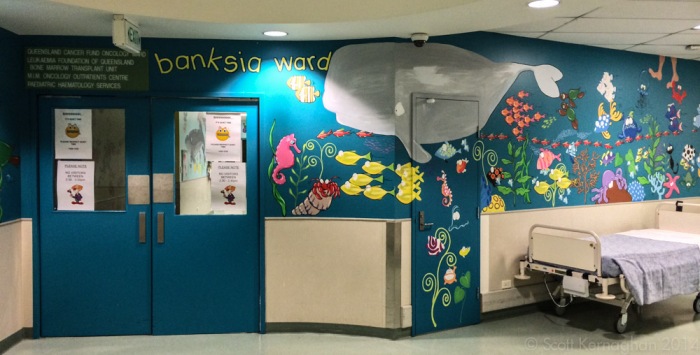 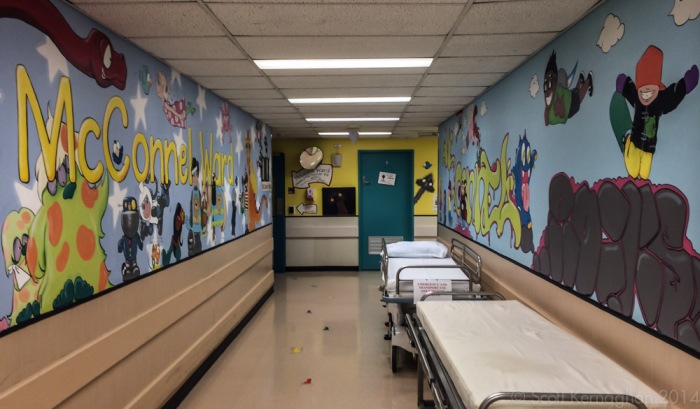 The rooms themselves were also very decorated, giving children something to look at while they were often trapped for long periods in their beds. 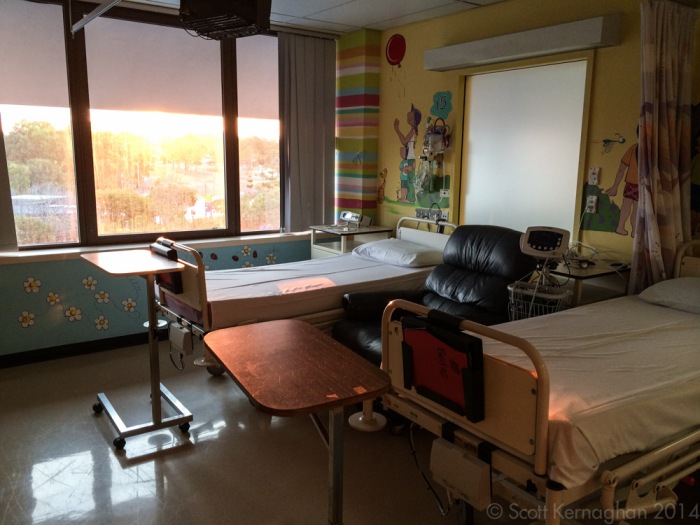 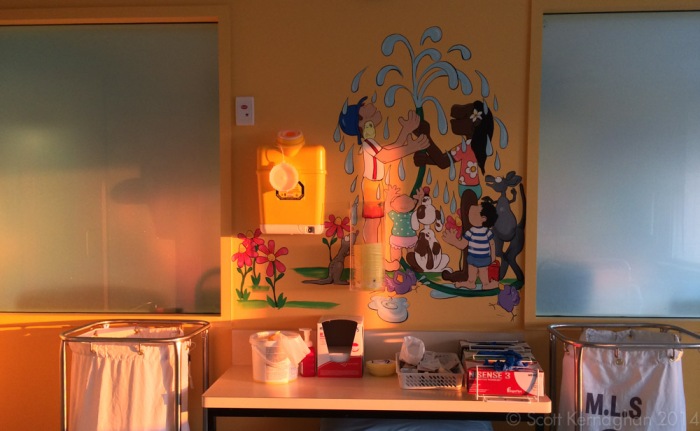 One particular room of is the operating theatre in the emergency department. Above the bed where children would be looking while being assessed, sewn up or operated on – the ceiling was decorated with a very elaborate space motif filled with stars, planets and flying space-ships. Lives were saved in this room, and I often think about the children that nodded off to sleep under aesthetic while dreaming of adventures in outer-space. 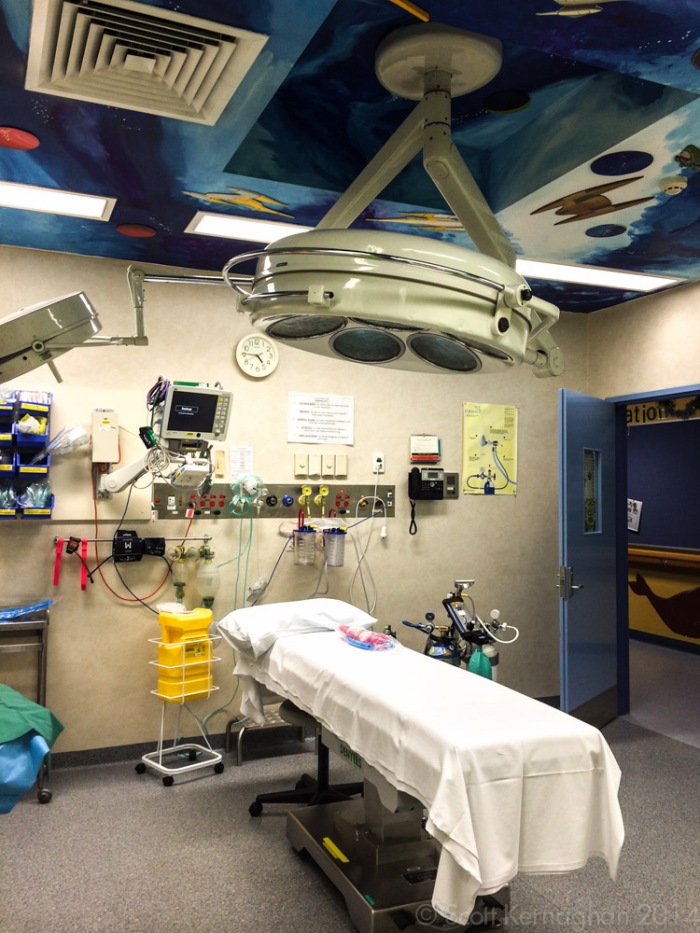 Art that led the way

When I was first interviewed for my position at the RCH I was told to find the office by heading to the hallway on the third floor of the surgical building, where I was to “look for the green dragon”. The door to the office was directly opposite it. A lot of the artwork around the hallways became landmarks, and many of them were intentionally designed as such. When one department moved their office to the floor above their original location, they stuck an artificial snow-man out the front of their door so that people could find them easily. Every week they dressed the snow-man differently – sometimes as a construction worker, other times as an angel.

Sometimes little pieces of art were just left around the place as items to discover if you looked hard enough.

n.files.wordpress.com/2014/12/theydbedragons.jpg”> Ah! The dragon that started it all for me.

Journeys into the night.

For the vast amount of time I worked at the Royal Children’s I worked in children’s oncology, or in a position that worked closely with the oncology patients and their families. However I also relieved in positions in other areas – amounting to an impressive amount of experience in all but 1 of the hospital’s major departments. I also worked in some interesting and crucial smaller areas such as the hospital’s consumables and equipment department, and surgical theatre bookings.

However one of the more unusual jobs I performed while I worked there was to undertake the ‘Pager duty’ role. The job started late in the afternoon, and went to quite late at night. As such I would often find myself wandering hallways that were usually full of patients and families but were now in eerie silence and darkness, to perform work that could amount to almost anything.

One of the core roles of the position was to properly mix baby formula for incoming babies and children. During the day we had an entire department that made up the feeds for the inpatients, however at night unexpected drop-ins would arrive, and require feeding. And for those who have mixed up baby formula for your own children and think this would be easy, I’d hate to bust your bubble, but hospitals have far more exacting standards than you’d expect, and this job was never just simple.

s.com/2014/12/formula.jpg”> The great catalogue of formula. More cans were kept under the counter.

The thousands of possible formul

[/caption]The thousands of possible formula mixes were catalogued on tables on the wall, and we had to make the mixtures up with sterilised equipment, measured to exacting weights. Water was boiled and then stored refrigerated to avoid contamination. I had to ‘gown up’ with every new batch made, and wash everything down extensively. There was nothing particularly easy or casual about the whole process.

Everything was then kept track of in a ledger which had been running since 1998. I was surprised to see the book still intact and in use when I left in 2014. Although it was on its last page, freakily finishing the entire book just in time for the new hospital, a cool 16 years after it started.

2014/12/formulabook.jpg”> Gosh. The amount of records I put in this book. And yet it never fell apart on me!

And then there were the hallways… Da

[/caption]And then there were the hallways… Dark, foreboding spaces that at precisely 9pm every night became even creepier, as you could hear the automatic doors along the hallways close and lock themselves down for the night – as though ghosts were shutting up shop for us. 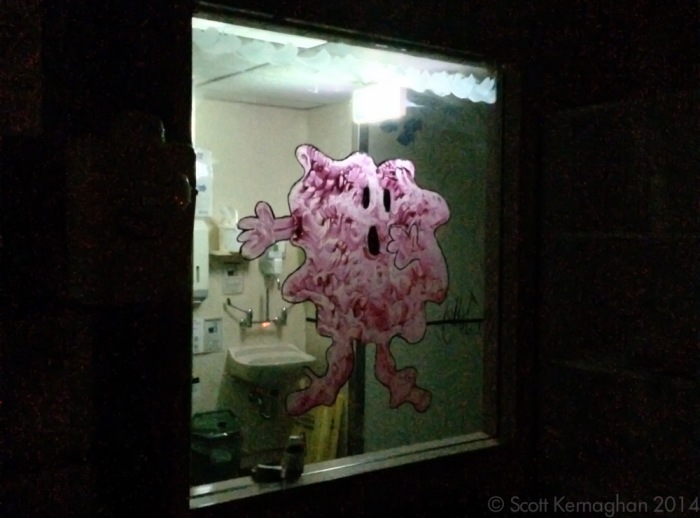 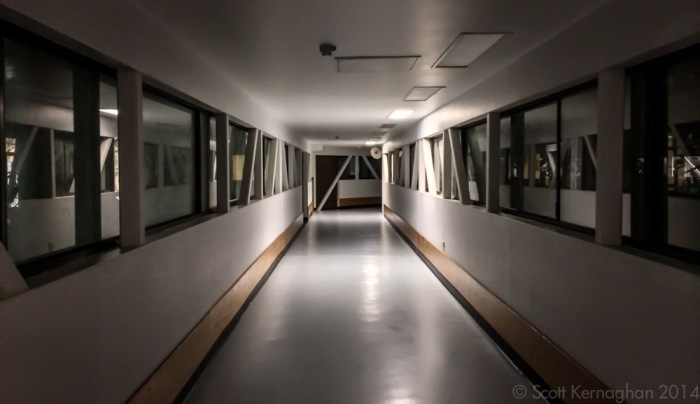 No matter where you walked, even at night, there was always something that showed signs of people and patients having been there, and the children that we cared for. 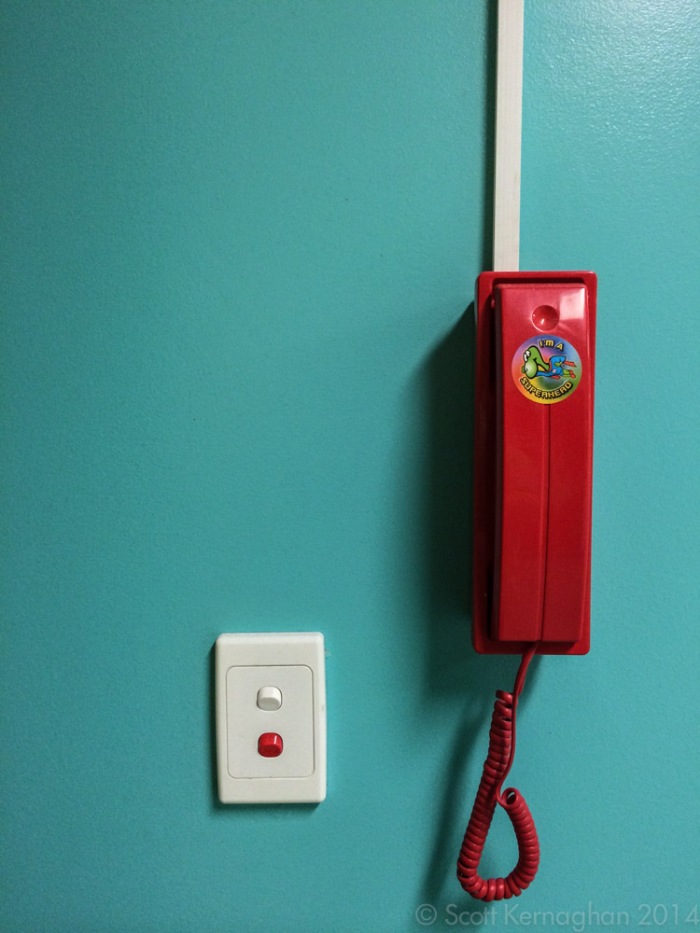 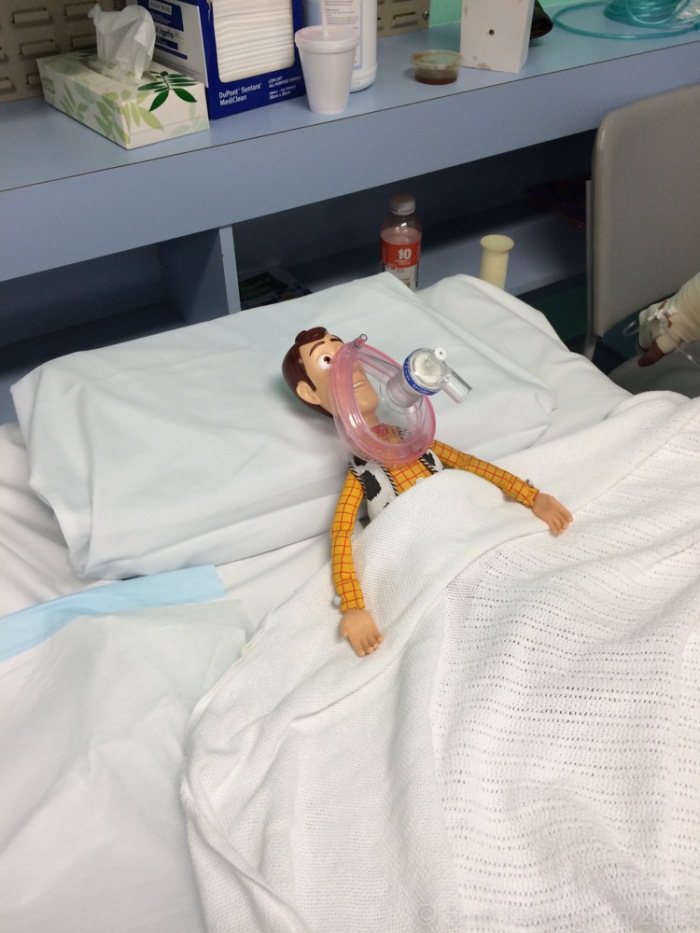 Some of the buildings in the hospital dated from the turn of the 20th century, while others were less than 20 years old. That said, things grew and changed over time, and most places took on a life and a character of their own. One of my favourite places to hang out would have had to have been the Oncology staff tea room, which had an incredible sweeping view the city centre of Brisbane. Often while working on an evening shift at the hospital I would find myself in there at break time, just enjoying the view of the city as the sun set. There were many little spots of unexpected beauty to be found just like this in the hospital. 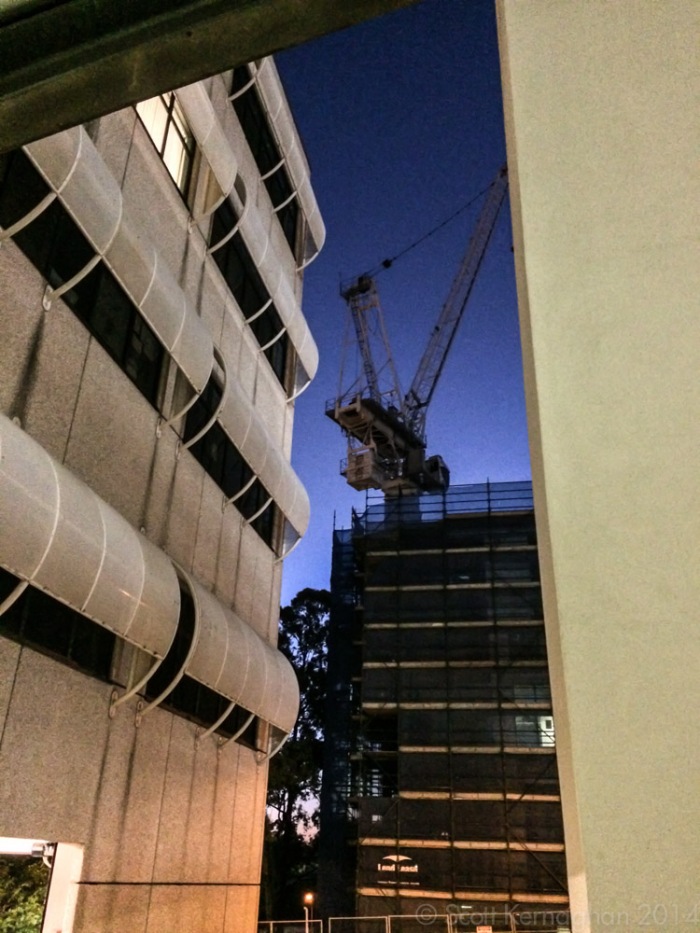 However, while there’s beauty to the buildings, there was always life inside of them. Many of the wards often seemed to be a mad-house of activity, and rooms were frequently too packed to move around.

The cots in the next photo are a reminder of the core business of the hospital. These cots were always waiting just outside the door of the oncology ward, in case one of the our younger patients needed to come in. We looked after children with auto-immune and haematology conditions as well, trying as best we could to give them as good a start in life as possible. 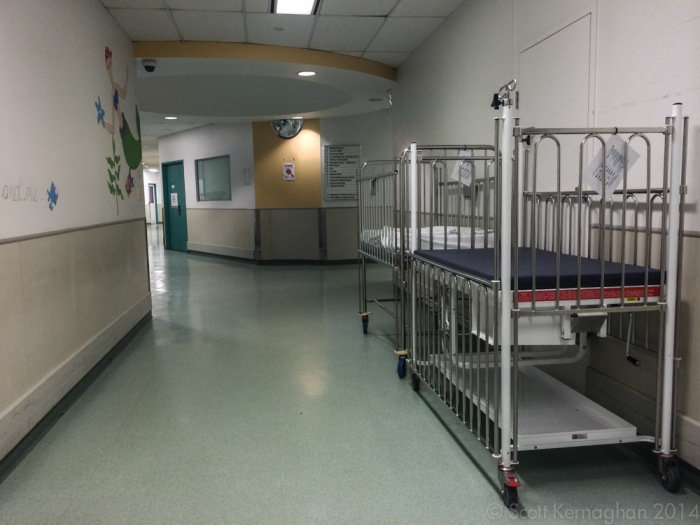 In a lot of ways this next photo is exactly how I would want to think of how the children’s hospital is now. The empty beds left idle after successful treatment, and all the children home with their families – everyone cared for and cured. 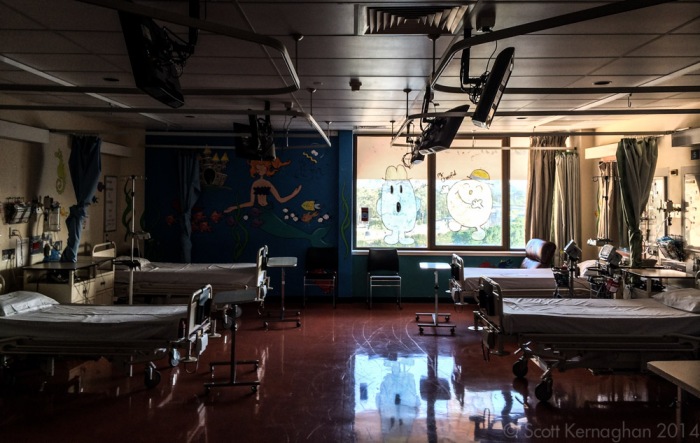 When things come to a close.

With so many ageing buildings at the RCH campus, things began to become very expensive to run and repair. Even some of the newer buildings were having crucial infrastructure failures, and despite much of the emotional attachment people had to the old buildings, it was pretty clear that we needed a new hospital.

The second day that I worked in the oncology ward, way back in 2009, a fierce storm hit and lighting struck the the structure on the roof of the hospital. Reportedly the rain was so heavy that the top floor of the building I was in started to take water, and leaks got into our automated fire system. First the fire alarms triggered, and then the emergency lights. As the regular lighting failed a final alerts system kicked into play – a voice recording of a man saying “Your life is in immediate danger, please vacate the hospital as quickly as possible”. Expecting to be engulfed in flames, many of us quietly browned our underpants. However some of the older staff just simply groaned and told everyone not to worry – after all, this wasn’t the first time this had happened. Sadly this building had been constructed in 1995, and was slowly falling apart. It was falling apart even faster than many of the other buildings that had been on the site for decades.

However there was one particularly haunting structure that had been mostly abandoned, which actually was an incredibly beautiful space.

I speak of the disused nurses quarters. The quarters were made up of three buildings – one of which was built at the turn of the century and was several storeys tall. The other two were towers that were known as the ‘north and south towers’, and had been built in the 1930’s.

Both of the towers were 8 storeys tall, and until the mid-90’s housed nursing staff that worked at the children’s hospital and the Royal Brisbane Women’s Hospital next door. Today the towers remain largely empty except for the bottom couple of floors which were refurbished to allow for extra office space. As such, what remains unused of the buildings has been left to crumble apart. No-where is this more apparent than in the turn of the century building that the two towers lead on to. 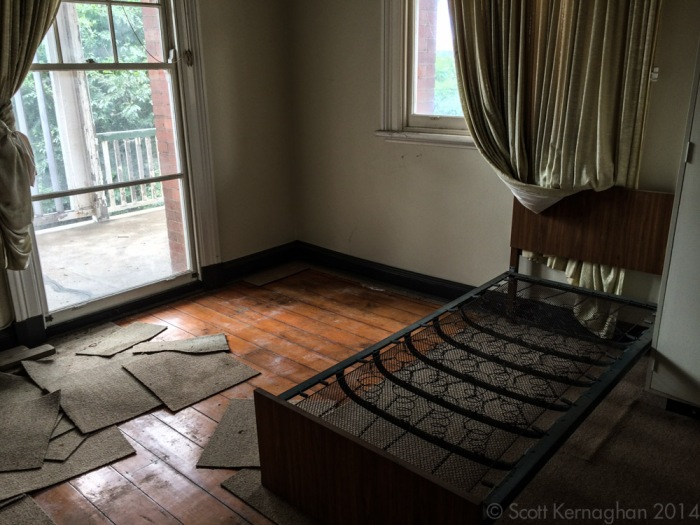 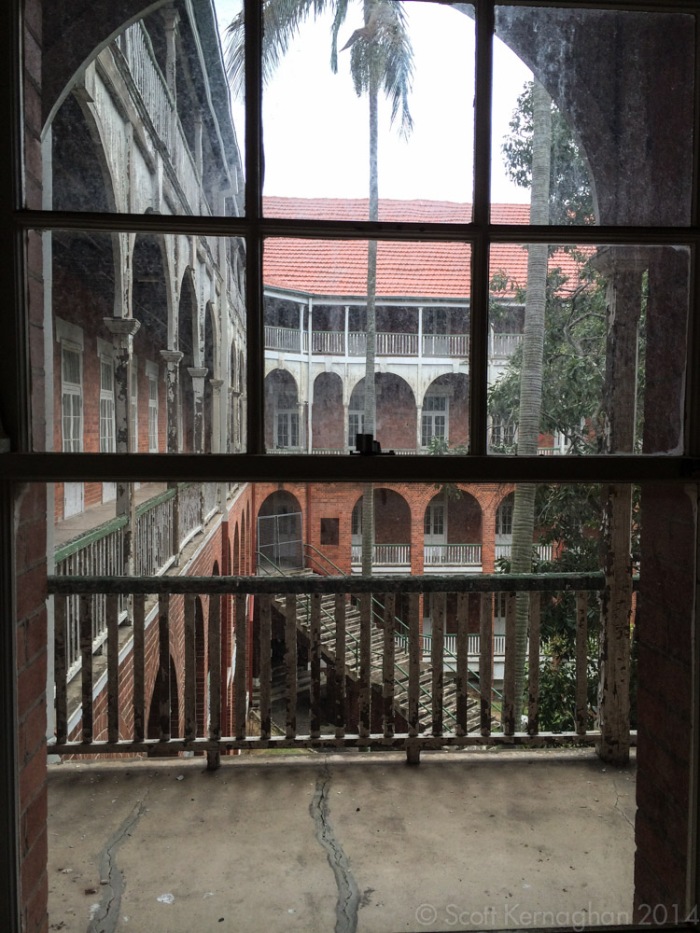 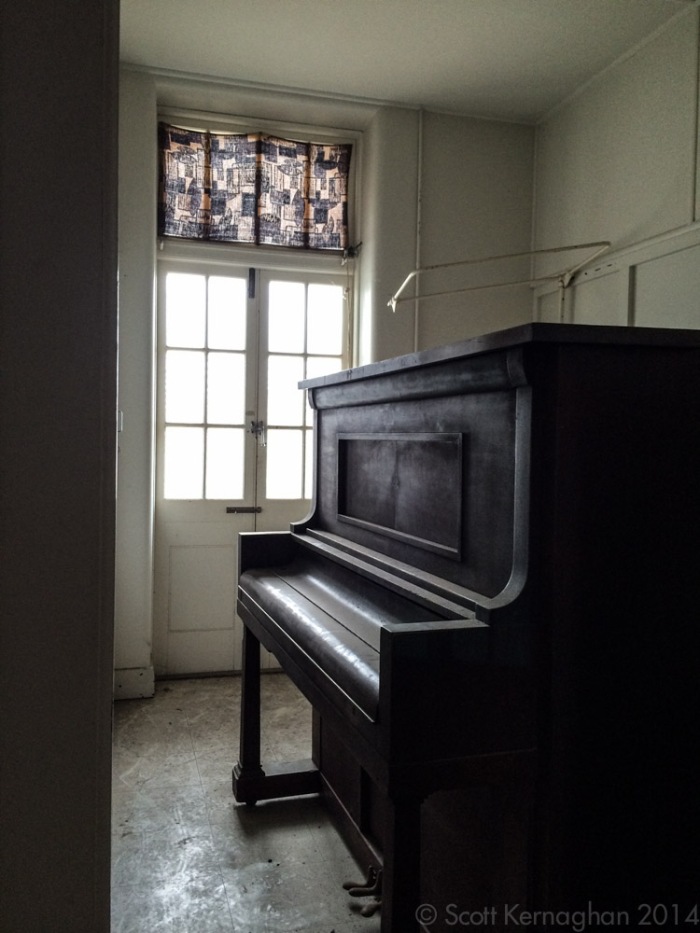 All of these buildings are heritage listed, and one day will be restored. Unlike the rest of the children’s hospital, which will most likely be torn down. A lot of people see this as a sad thing, and wish that the entire site was preserved. Change is often a very sad thing to endure. Personally, I think there’s a great future to be had at the new site once the teething problems are resolved. The new hospital is longer going to be known as the RCH, but rather the LCCH – a mouthful of a name that is going to be a tongue-twister for its new inhabitants. But I wish them well and all the best for the future. Now, as I move into 2015 the RCH is going to be a piece of my past that I look back on fondly. Mostly. And I’m grateful for the friends that I made when I worked there.

40 thoughts on “Farewell to the Royal Children’s Hospital, and 2014”