The flying time from Melbourne, Australia is brutal. I watched the sun rise as our plane took off at 6am, only to see it set 22 hours later as we commenced our descent into Leonardo Da Vinci – fiumicino Airport. On the way we stopped by Dubai for two hours, providing a stark contrast in locations only 6 hours apart. Italy is lush and green with dense areas of population, while Dubai is a sprawl surrounded by a dusty flat desert.

It is March, 2018 and Italian elections are looming. The Mercedes that picked us up from the airport zoomed at absurd speed down the highway towards the city, but once in suburbia we crawled past walls covered in voting posters and slogans. I’ve never been here before, and as I pass dimly lit embassies of tiny countries I couldn’t help but feel how all of this looks like the backdrop to cold-war era James Bond films. 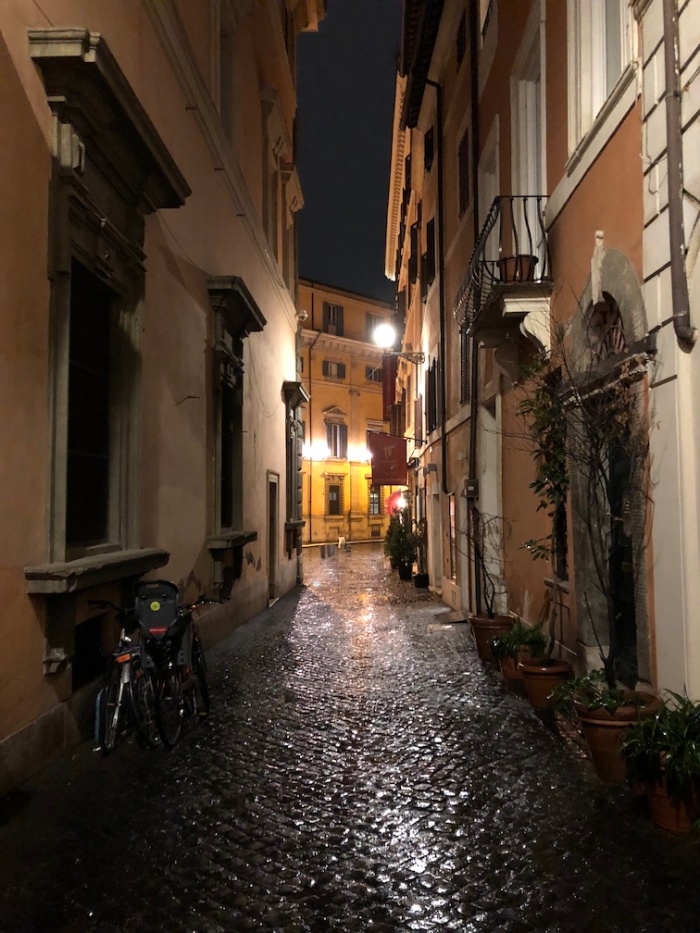 The laneway our apartment was on. Such an awful location I found for us!

A german woman met us at the kerb. I gave a handful of Euros to the driver and we then followed the woman up the stairs into the apartment we were renting. It was late, but she was kind enough to still come out – with the protection of her son, so that we knew how use the facilities in the unit. Once settled we headed back out onto the street. At the eastern the end of the laneway if I turned left I’d find the Co-op supermarket. if I turned right I would find the Trevi fountain. I could hear its waters gushing but I was also hungry, so we ventured to it after we bought some food.

Yep. That’s the Trevi in all its glory.

The next morning I woke to the sound of a baby crying and the patter of rain against the window. I had left the radiator on that night and the room was near unbearably hot as the thick walls of the building were extraordinarily good at keeping the warmth in. Outside was a different story. Two days before we flew out of Australia the ‘beast from the east’ had waved across Italy, blanketing Rome in snow. Some pockets of snow were still holding out on rooftops, but the rain was slowly washing this away.

Jane and I cooked some breakfast and again visited the Trevi. We then headed away from the apartment the western direction. Jane had spotted something online, and was insistent that we head to the Galleria Nazionale d’Arte Moderna – The National Gallery of Modern Art. This was her trip, so who was I to argue? As we walked around the corner away from the apartment a familiar sight greeted me from an office window.

A somewhat mis-handled L C Smith with a cork platen.

I took a few steps back and looked in through another window to figure out what kind of place this is, and was heartened by what I saw.

Now this is how you decorate an office with serious cool.

There’s two Olivetti typewriters adding machines flanking an iMac. This may not be everyone’s cup of tea, but you’ve got to admit as a typewriter and tech lover, this gives you a warm glow inside. Perfect. This is a communications office attached to a hostel, and everything in this view is there for use.

We descended into the earth down to Rome’s underground rail network. Again, this felt so foreign yet familiar – like something from those cold war dramas. The stations are dark and dirty concrete boxes with surprisingly little design involvement. By comparison my home town Melbourne’s underground rail stations are a beaming light of modernity, and Hong Kong’s are like something from science fiction.

Once near our destination we took a walk through  the Villa Borghese Gardens towards the gallery. As you would expect these gardens are filled with fountains, ponds and lakes and millennia trod bluestone paths. Italy didn’t exist as a country until 1871, beating Australia by only 30 years. But unlike Australia no one questions the existence in history before that time. 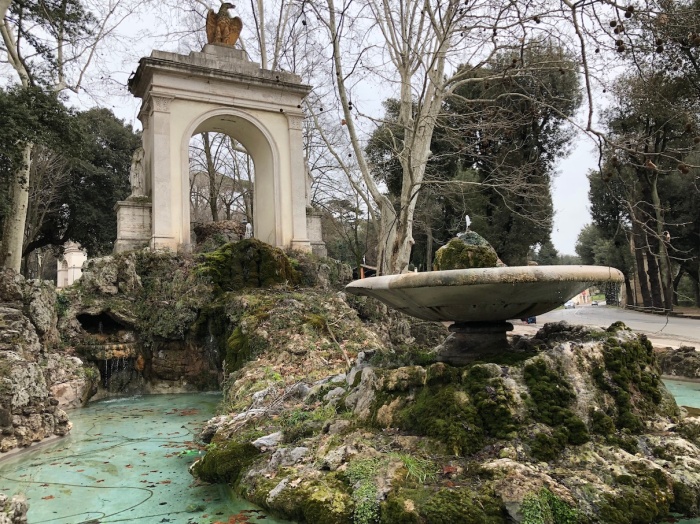 Finally we make it to the Gallery. And ageing tram rattles past as the first droplets of the afternoon’s rain arrive. We enter and head to the counter to pay. But it’s the first Sunday of the month we are told, which apparently means that all the galleries are open for free in Rome for the sake of the citizens so they can enjoy the treasures of the city’s art.

The gallery is as grand, and classical as you would expect of a gallery in Rome. However it feels anachronistic to a space  that’s meant to be filled with art that has tried to escape from the shackles of classical imagery. Here however, it finds the classics are still being dragged behind them in its wake. Much of the gallery feels like this as the curators keep one foot in the classical antiquity of the past, with another seeking a foothold in the finest of the modern. Pollock and Warhol hang beside spectacular renaissance pieces, barely ever being allowed to clash, although if you look hard enough there are pieces that directly challenge the classic with the modern, framing the jarring differences alongside others celebrating their parallels.

The front steps were painted with the words ‘Time is out of joint’ in english. I should have known on entering that that the gallery was going to be speak with such dichotic language. 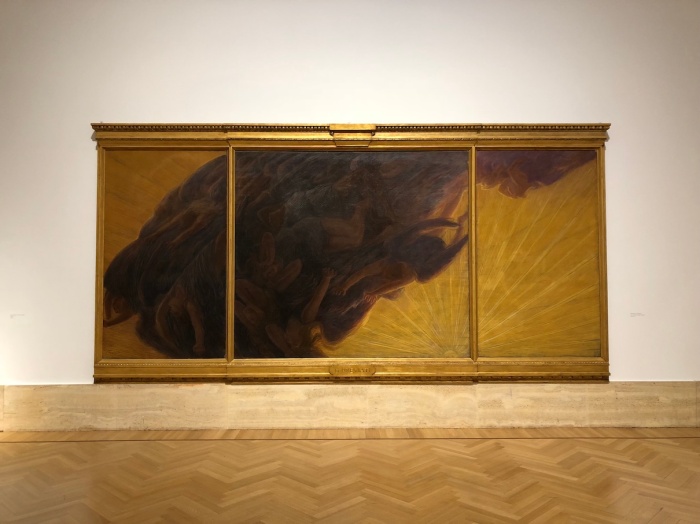 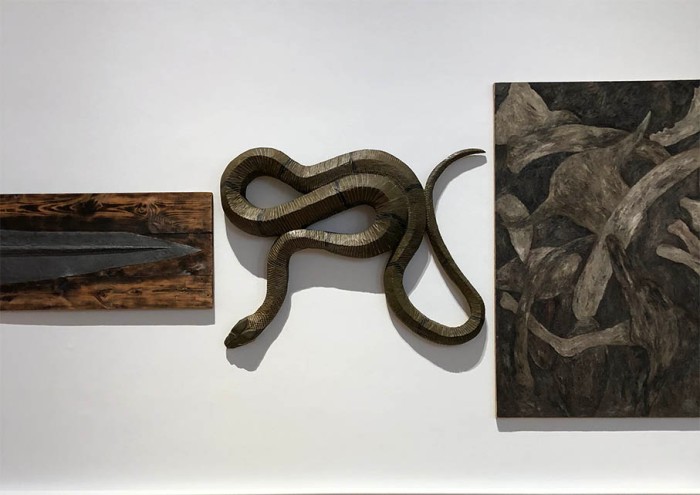 We travelled from room to room enjoying some of the incredible works that have been collected here. Just as we were wrapping up, Jane gestured to a doorway leading off to the side from the foyer. We walked in to a room that was mostly empty, bar a typewriter on the floor: an Olivetti M1

On the wall is a potted history of Olivetti and a discussion about what the exhibition is about, along with a map of the exhibition across the two floors of building. Yes, quite a sizeable exhibition.  (You can listen to a podcast I did last year on the exhibition here)

The exhibition itself is as much a discussion of the culture of life within Olivetti, as a celebration of the design and architecture works of the company. Olivetti valued skills disciplines equally, with the arts merging firmly with the engineering sciences of a company professing forward. Olivetti clearly understood their position in the world, creating products as a business enterprise that could and would seek to improve communities with function and aesthetics. A belief that they put into every aspect of their organisation.

Entering the large hall you are greeted by a table giving you an immediate idea of what the exhibition is trying to achieve. Olivetti’s dynamic posters are framed alongside a discussion of the architecture of Olivetti’s workspaces, along with a tribute to the originators of Olivetti and its history.

But it isn’t long before we are thrown into the world of Olivetti’s typewriter designs.  Here’s a Lettera 22 in the often found ‘mushroom’ colour, sitting on a light table as though they are expecting you to get down to work and start typing immediately. 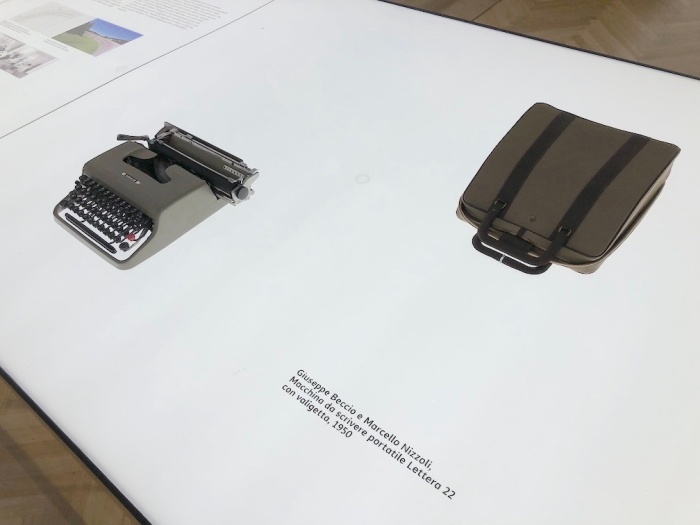 With great pride the Olivetti exhibition moves on to the innovative graphical design work that they produced with graphic design in the 1950’s and 60’s. While the curators wouldn’t say so themselves,  the exhibited work is influenced by much of the Bauhaus graphical design direction of the 40’s, while taking it in a newer, contemporary direction.

Screens on the walls display advertisements produced by Olivetti for the Cinema, and sometimes TV during this era. 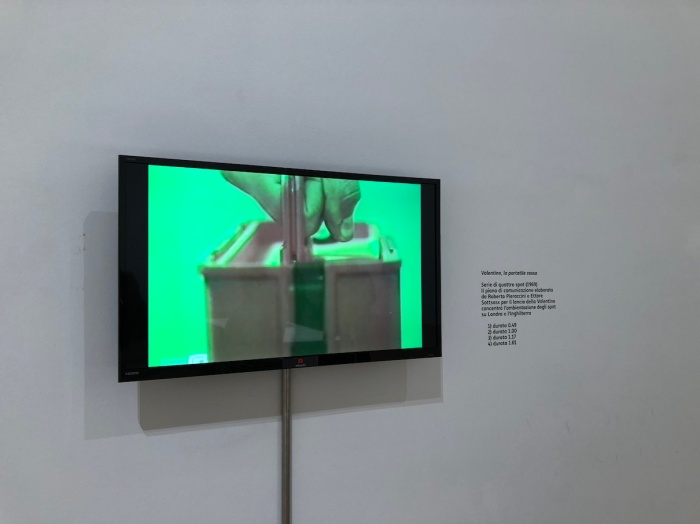 All of this is showing on Olivetti branded monitors of course.

Moving into another room you get a sense of the change of direction Olivetti took in their design aesthetics. Greeting me here was Olivetti’s arguably most well regarded typewriter design: The Valentine. 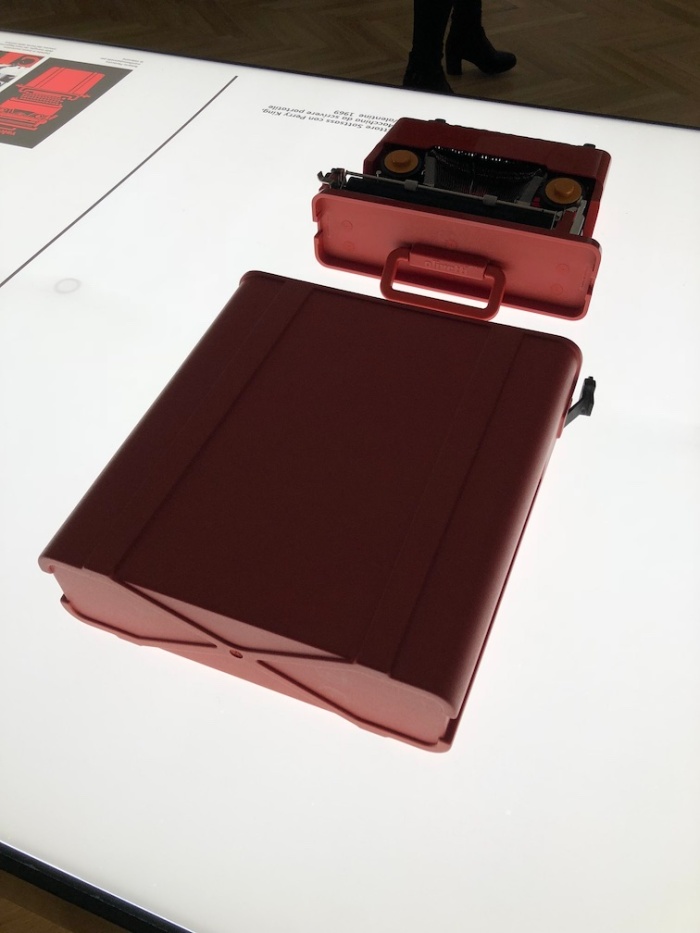 If he didn’t like his Valentine so much, perhaps Sottsass should have stuck with playing with his… um…

Upstairs in another room a chair sits in a corner looking lonely and oddly out of place. But it has the unmistakable hallmarks of Sottsass in its design. It’s a piece of Olivetti history that the curators seem to have known was important, but weren’t sure where to put it or how it fit. 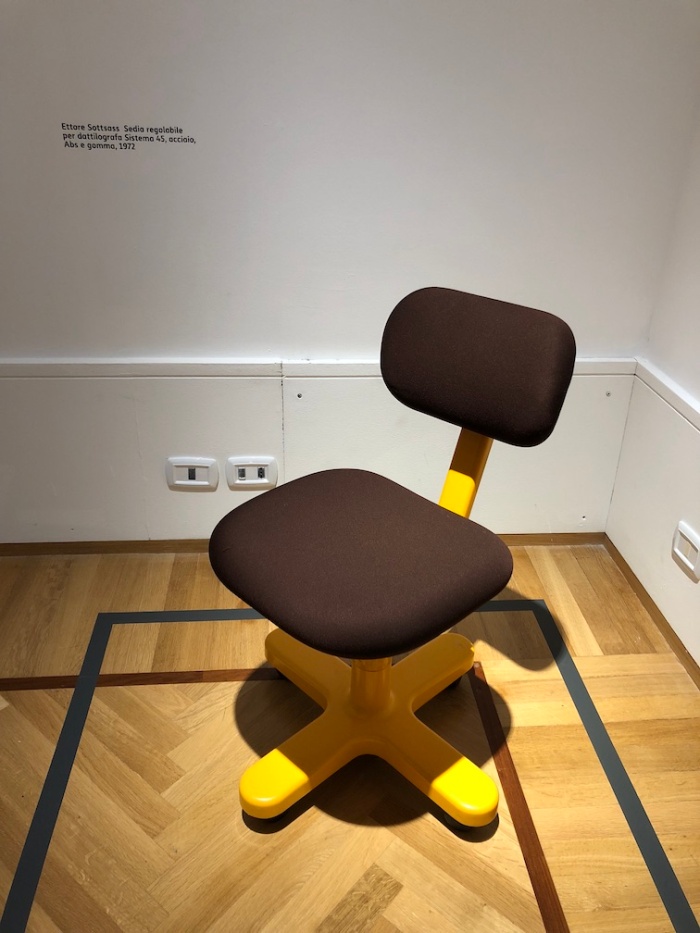 At this point the exhibition takes a very different turn. There’s an explosion of the development of electric and electronic products talked about, with The Olivetti Praxis sitting amongst some incredible other pieces.

The Praxis dropped the curved faux-organic feel of earlier Olivetti designs and threw itself headlong into modern minimalist cubic shapes, embracing the sharp and man-dominated machine age of the era. A language that would eventually give way to the bold colour and curves of the post Valentine design later favoured by Olivetti.

But focusing on the machines on the light tables would be to miss the emphasis of the artistry on display. While many of the typewriters are magnificent artefacts of modern design, the principals were imbued to most other aspects of Olivetti the company. In a lot of ways Olivetti was an idealists organisation with a product focus that built a social attitude around those ideals. It was capitalism without the dumbfuckery towards society and community that we see today.

The graphic design team were the ones to make the most of the modernistic freedoms and aesthetic values of Olivetti, and embracing the a design language.

Magazine advertisements of the era, as printed on the page. 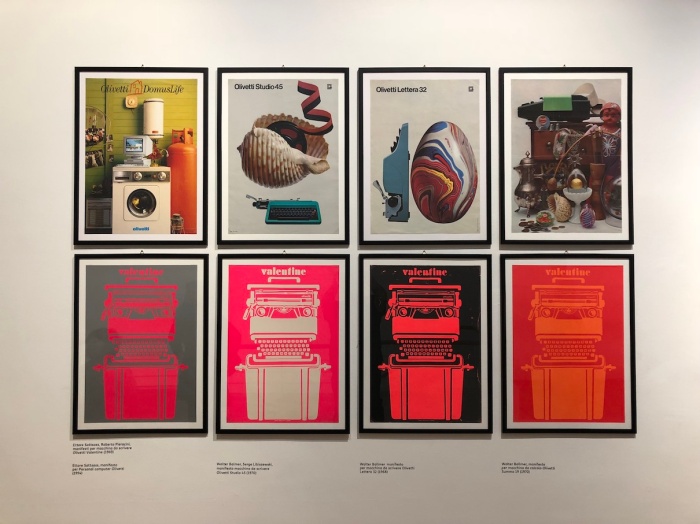 But it took imbuing this to more the just basic designs of products. Olivetti pushed their principals through architectural design, building residences, offices, apartments, schools and factories, building them with the same values. 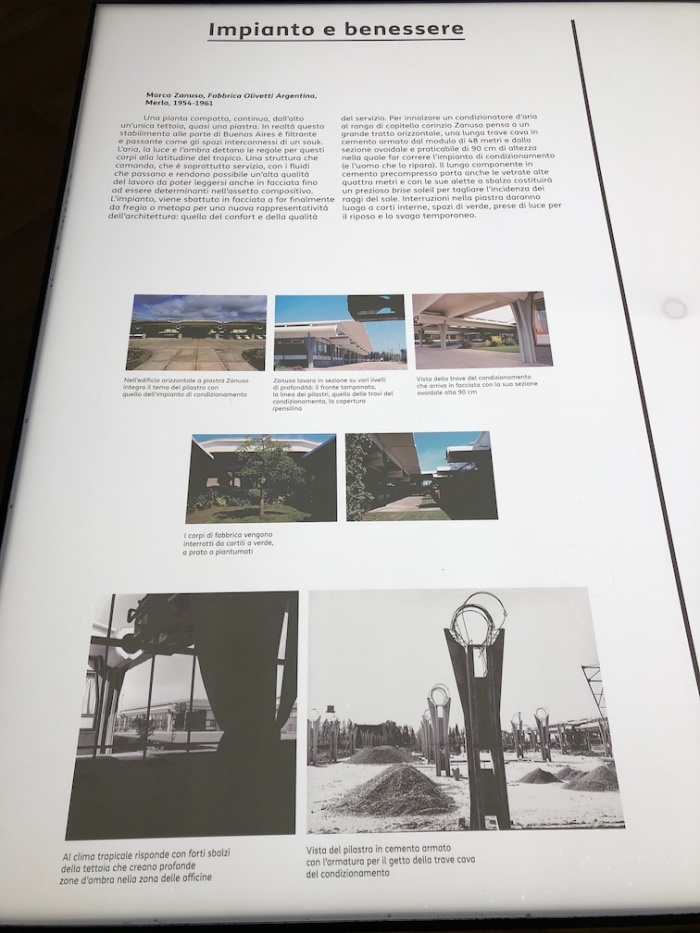 Olivetti’s work extended even to the factory floor, where they took care of workers and built workspaces that were efficient, productive and social. In the last display on the top floor of the exhibition the curators lined the walls with photos of life within Olivetti, of the people and places that made up the company. 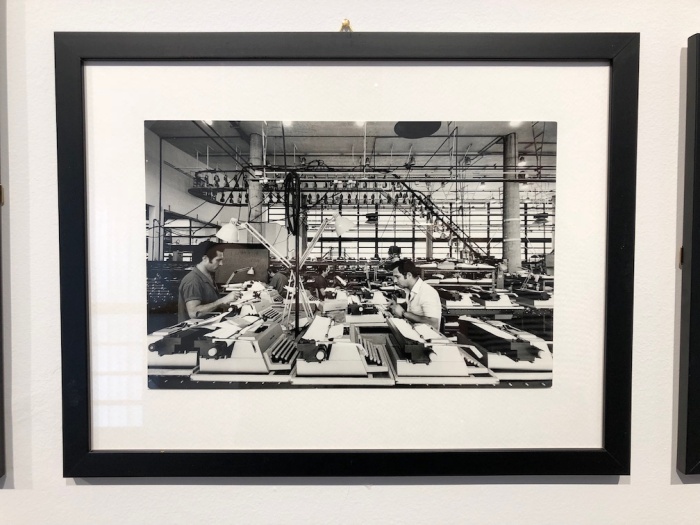 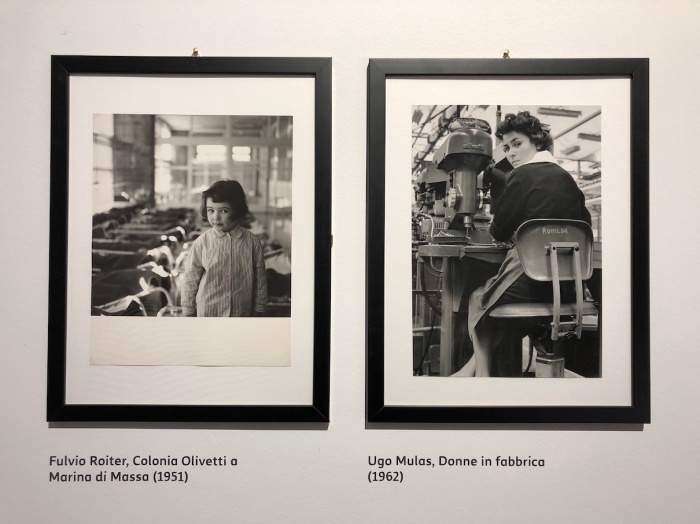 You may notice that I haven’t Olivetti’s stores here. While it didn’t feature much as part f the exhibition, all I can say is this isn’t my last blog post on the Italy trip. Believe me, the subject is going to come up again soon.

By the end I started to feel proud of the Olivetti’s in my collection that I have overlooked and largely relegated to the back of my collection.

I hadn’t even known this exhibition was on! I am so very glad that Jane spotted it online.

Me, unsure which L22 I wanted to pick.

Of course.. you can exit via the gift shop – which had a substantial collection of odes to Sottsass for you to buy.

Oh? It seems that the Valentine is going to haunt him forever.

Afterwards we took a further walk around the park, but had to abandon this as the rain started to pour down. We headed back to the apartment and on the way got off at different train station than we got on earlier.

Walking down hill  from the station we passed the headquarters of Il Messaggero – a major newspaper that services Rome and the region. Peeking through the doorway I could see they have a Linotype machine on display that’s encased in glass for its protection; another beautiful piece of steel and keys that celebrates the printing of the written word.

Rome is a city that has one foot permanently in the past as it tries to step forward, and that’s okay. When you look to the future sometimes it is best to keep yourself grounded on what you’ve built. Olivetti may not be the giant encompassing company it once was, but a river doesn’t flow the same way forever. However it is what that river cuts in the landscape that will endure.

6 thoughts on “Rome: City of typewriters”