Here over at Filthy HQ, I occasionally feel the need to actually go to work. Most of the time, this need seems to occur pretty consistently on a Monday, Tuesday, Wednesday, Thursday… and surprisingly Friday. This usually occurs on a weekly basis.

Work however, is at the moment an astonishing 40 kilometres by road from where my bedroom (the other place I visit frequently) is currently situated.

In order to overcome this obstacle, I often employ a variety of transport methods. There’s the Train, which also involves a lovely 25 minute walk on each trip. There’s the car, which involves fighting for space in traffic jams – against roo-bar laden Utes driven by testosterone filled drivers before paying an absurd price for parking. And then there’s my favourite, the Motorcycle, which involves fighting with pretty much everyone, but parks for free.

I…. LOVE my motorbike. Not more than cheese, but I love it dearly. I’m not an occasional weekend rider, as I ride several times a week. My motorcycle has roughly 10 times the amount of kilometres on it that most motorbikes in Brisbane have before they end up being parked in a dusty corner of the garage, only to be occasionally peeked at by men and women that want to feel the pangs of their rebellious youth.

This week, I had a little bit of company on my motorcycle. It was a mechanical friend by the name of ‘Kermit’. Kermit is a green Hermes baby made in 1957, and is in astonishingly good condition. Kermit is unique in that he also has a green ribbon to go with his hospital green looks, and is often stocked up with green paper.

It ain’t easy being green…

Hi-ho, Hi-ho, it’s off to work we go…… Oh wait, I’d better secure that handle.
I was going to visit a friend of mine afterwork and drop Kermit back her. ‘Baroness’ has been using Kermit for a variety of things of late – Scrapbooking, letter writing, diarising etc. and I was pretty eager to get Kermit back into her hands.
Baroness is a very lovely friend of mine that I previously had worked with. About a month or so ago she was diagnosed with a ‘DNET’, a kind of brain tumour that is a bit like the tumour equivalent of a ugly inherited piece of furniture in your home. It doesn’t grow on you, nor destroys your world, but it just offsets everything and is generally an annoyance when you find yourself occasionally kicking it because it is shaped wrong – leaving you with bruises and scrapes. Not to mention, you can just never seem to bring yourself to get rid of it.
I had a bit of a logistical problem this day, transporting Kermit. The Ventura bag that sits on the frame on my motorcycle had been co-opted for use by Ms Jane a few months ago for use on her cruiser, and as such was still with her.
It would have been absurd just driving to work, so that I could sit Kermit in the car, and incur a $22 parking bill, only to transport one little typewriter.
So, I stuck some padding on the bars of the frame, and brought out the magical, mystical hold-alls known as ‘Occy straps’. I always keep at least one of these straps somewhere on my motorbike.
Before long Kermit and I were heading down the road together. I occasionally lifted my elbow, and looked into my rear vision mirror to check and see if Kermit was still okay on the back. 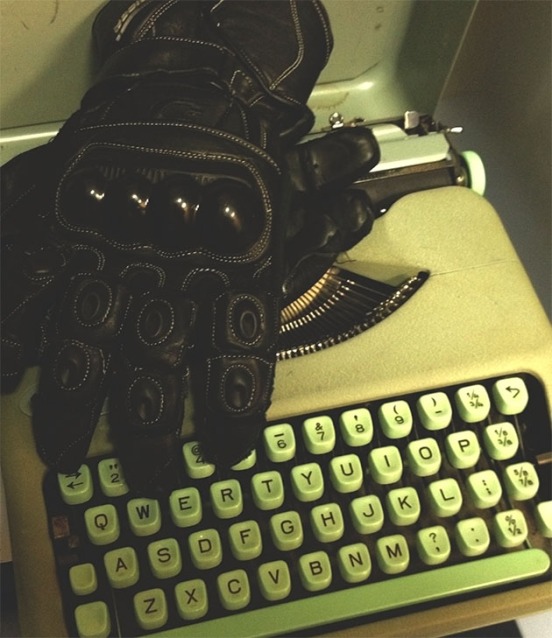 Do you have protection?
I may never manage 96wpm on the keyboard of Kermit, but Kermit was just fine at 120km/h.
Ooops. No, sorry officer, I didn’t exceed the speed limit. Honest.
……… Anyway.
I got to work by about 6:40am, and unstrapped Kermit from my bike. There was no way… NO WAY I was going to leave him out in public. Who knows what might get typed on him! I returned at about 3:30, and strapped him back on again, ready to fight the traffic up Bowen-bridge and Gympie roads.
I hate Bowen-bridge road on a motorcycle. And hate is far from being too strong a word. The outbound direction of this road has 4-5 lanes, and can often be jam packed. When it isn’t jam packed, it is usually filled with trucks, buses, utes and wanna-be race car drivers that are bewildered by the sheer width of a road that isn’t a freeway and has many streets and turn-offs feeding in and out of it.
But I had to go this way. I zipped my jacket tight, pulled my helmet on and…. “Is that a typewriter”? Ms Jane, who works in the same hospital as I had come up behind me. There was an eye-rolling in her tone, but only slight. I explained to her that it was on its way over to a friends place, and then we chatted for a few moments about the kind of day we’d been having at work.
I had calmed down a bit now, and I felt confident again to take on Bowen-bridge road, and its extension – the dreaded Gympie road.
Every chance I got, I blasted my way away from the traffic on these roads. It would only be a brief respite though, as I would quickly join another group of bad drivers at the next set of traffic lights, before also finding the previous set joining me from behind. I typically don’t split traffic on my bike, and today was no exception. On these roads the unpredictability of the traffic can be fatal.
Every time I bolted from a cluster of traffic, or manouvered my way around it, I would check under my elbow to see if I had inadvertently lost Kermit in the ruckus. But Kermit was holding tight, maybe for dear life… maybe just because I actually was pretty good at strapping him down.
I found my lane compromised by cars on a couple of occasions, and I utilised the emergency lane to get away from these morons and ahead of some large clusters of jammed and uptight traffic. In these clusters a dangerous dynamic occurs; people become agitated and aggressive. This is a fear response, and the most aggressive drivers lapse into a kind of fight or flight tunnel vision, and they are unable to process the complex situation around them.
As such, the basic parts of the brain assesses you for a threat. We all have a false sense of security in our car cages, and as such a motorcyclist – being a smaller entity, tends to be regarded as inferior. People will often turn into your lane on top of you, as though you were never there. And to them, you weren’t. Their brains processed you as non existent. This can happen in heavy traffic, and speeding light traffic, as people’s brains often find themselves over-stimulated while planting their foot.
As a motorcyclist, the quicker you learn about this, the longer you will survive. No one rides a motorcycle with the misapprehension that they are safe, even though many riders often take higher risks than they should. This is unlike car drivers, that are caged from the exterior world and largely feel safe and secure, even if the annual road toll doesn’t bare this out.
Anyway, Kermit hung in there completely unfazed. I eventually turned off Gympie road and felt my heart rate slowly drop. Kermit is now back in Baroness’s study, awaiting his next task. I would love to see a letter from Kermit from time to time, but it is great to see him back in use again. Kermit is quite the traveller!
And while Kermit isn’t as quick to write on as – say my computer’s keyboard, while sticking it out on the back of my bike, he’s the world’s fastest Hermes in my books.

9 thoughts on “The World’s Fastest Hermes…..”