I’d taken an RDO from work, but I still woke up at 5am. I collected a passenger and dropped them at work before I dropped my car into airport parking. The courtesy bus from the parking place was crammed with a Maori family heading to the international airport, and their baggage took up the entire luggage space at the rear of the bus, blocking all view out the back window.

It was actually quite cold for a Brisbane morning, but I knew it would be even colder in Canberra. I didn’t care as I was too excited. It was going to be a short trip, but I was pretty sure this would be a worthwhile one.

Boarding the plane was relatively without fuss. I had an empty seat next to me on the plane, so I was able to just spread out and chill. I had packed light; I had a shoulder bag containing little more than a printout of my flight, my iPad, some headphones,  a camera and my wallet. Oh, and some house keys.

Before long I was on the tarmac of Canberra Airport and heading out the doors to the Taxi rank.

“Lovely day” I said to the driver.
“I long for these cold days” he said to me in a broad English accent. “Makes me feel more at home”.
“Where are you from”? I inquired.
“New Delhi”.

Canberra’s like that. Nothing is quite as you’d expect. To any outsider that cared to look at Canberra – Australia’s capital, you’d probably believe that we hated our politicians so much that we built a farm for them in the middle of no-where to keep them away from the rest of us. It’s Australia’s only capital city not on the coast, and it is miles away from the nearest interstate highway. It is truly out of the way from anywhere.

But it is also where Robert Messenger lives. Rob is probably Australia’s greatest Typewriter blogger, and one of the most researched fellows on the subject I have ever come across. From what I could tell – his collection of typers was something amazing to behold so this exhibition was one I wanted to not miss.

And can I tell you…. It was worth the trip.

The entrance to the gallery was littered with dead machines and a steel catfish. No typers though.
I arrived at the Gallery still unsure as to whether I would meet Robert or not, so I looked about to see what other exhibitions were running. It didn’t take long to locate Robert’s exhibition, as a chalkboard out the front of the gallery had nicely listed up the exhibitions currently running in the building as though they were todays specials at the local cafe. It felt quaint and warm. I whipped out my camera and documented a few scenes in the courtyard before going in. It was quite bustling, with a few senior citizens hovering about and a few other ‘grey-nomads’ in their grey-nomad uniforms, who were waiting for a tour group to start. 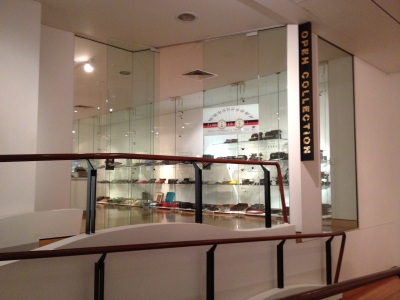 Free entry? Excellent…
The building was a modern construction and had clearly been built after I’d last been to Canberra. Like most of Canberra’s galleries – and there’s a lot of them – the building had been competently constructed, brilliantly designed, and felt lively and light.
Robert’s exhibition was placed in a room that looked as though it would have usually housed museum artefacts or sculptures. Both of which Robert’s collection could potentially be described as.
Whatever I was going to see this day, I knew I was in for a treat. This was largely the cream of Robert’s collection crop.
The exhibition itself was set up simply enough. Across one wall was Robert’s collection, which was housed behind glass and positioned on floating shelves. The opposite wall had brief pieces of information that was Robert’s biography – insofar as his history of him collecting and using typewriters. On the far wall from the door that I had entered through, a large plasma television played repeatedly the segment of the television show ‘Collectors’ that Robert had appeared in few years ago. on either side of the television were two tables that housed 3 Olivetti Lettera 32’s, and the ominous IBM Selectric II that had been converted to a scientific keyboard.
Rounding off the display were two cabinets in the middle of the room that displayed toy typewriters, ribbon tins, and a few other pieces of paraphernalia.
Before I knew Robert as the blogger, or Robert as the typospherian, I had known of Robert as the collector. I had seen Robert on television when the episode of collectors he was in first went to air. In fact, I even discussed the episode with my Grandmother – who was still alive at the time, on the phone, as my Grandfather had been a callout typewriter repair man for Adler for many years.
Of course, I did get to meet Robert in the end – but I blogged about that a little while ago over – HERE.

And now here I was, standing in the midst of Robert’s collection. And these machines were stunning.

I’d seen many of these machines online before. But to see them in person was magnificent. In a few ways I felt proud. I owned a handful of the versions of the machines that were on display in this cabinet myself, and I appreciated them all the more as a living piece of art the moment I saw them here.
I could look at these machines from historical point of view – but largely that’s not what this exhibition was about. The date of their birth seemed less important than artistry of the machines themselves. Every one of them felt as though you could take them off the shelf and put them on your desk and type with them right now. The only thing that stopped you accessing their inviting keyboards was a few sheets of glass.
No doubt I could do that kind of typing when I got home. In fact I could do it then and there – and actually did! First by blogging from one of Robert’s typewriters at the back of the room, and later by by using using some of Robert’s machines at his home. I even the Bijou that Robert gave me a bit of a run while sitting at a table in the gallery. 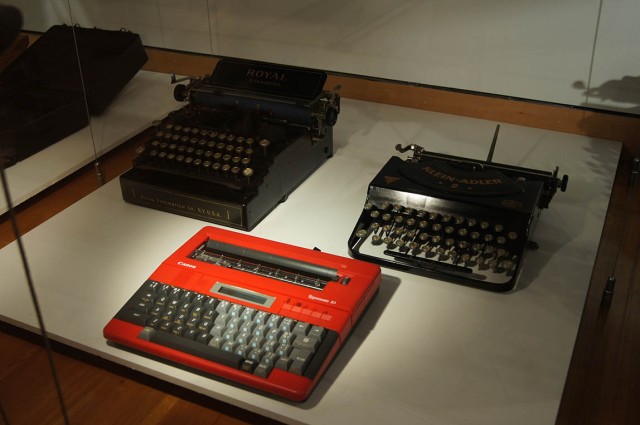 The mix of machines was just right. These machines were a marvellous selection of the old and modern. And they were absolutely amazing. Did I want any of these machines for my own collection? Every single one of them.
Having several machines on display for others to use was a really nice touch. The amount of ‘I was here’ messages that I saw strewn across pieces of paper give me an impression that they had seen some serious tapping of keys at the hands of a much younger crowd. 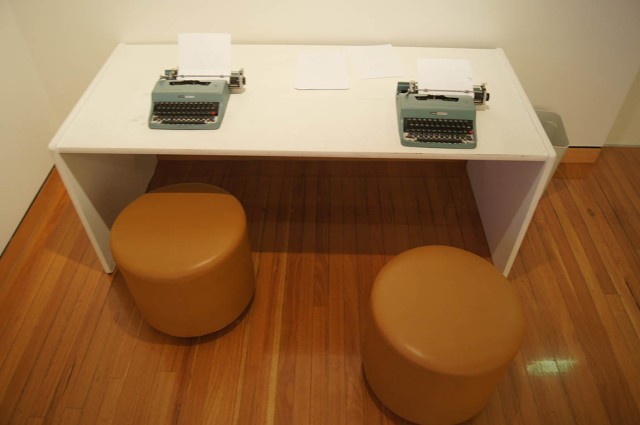 Type on me…. I dares ya.
But was there a standout machine?
This is a tough question – and I’m sure some of you will be a bit surprised by my completely subjective answer.
I have a love of Art Deco styling and design. I also have just as strong a fondness for the conflicting – yet rather similar style of Art Nouveau. And while the Oliver 5 in Robert’s collection stood out as a grand example of Nouveau, there were two machines that really grabbed my Art Deco loving attention.
First, but not foremost – was Robert’s ‘Bing’ typewriter.

Its Deco stylings were cool and sophisticated, and despite the relatively down price nature of the machine, it had style in spades.
But the machine that took my heart the most – would have to be Robert’s Royal 1 flatbed.

Under-lit and hidden away in a bit of an odd corner, this machine’s style leapt out at you as you looked at it. No other machine I have seen to date has captured the era’s design aesthetic so well. This photo doesn’t do it justice, but I just took a look one look at it – and I was in love. A feeling for a machine that I hadn’t had since I first clapped my eyes on an Oliver.
I’d seen photos of these machines before, but never felt particularly impressed. But now seeing one with my own eyes I have to say – I was impressed.
Sitting there in the dark, I almost asked it if it had been fed any new paper or ribbons lately. It seemed so lonely, especially as it had only a Canon typestar to keep it company.
There were many other outstanding machines in this collection, including a Gold Royal! I didn’t even know Robert owned one. But there you have it.
Very, very cool. And I thank Robert for sharing.
*   *   *
Later that day Robert loaded me up with a couple of magnificent machines before I left for the airport. However I hadn’t brought with me a suitcase or bag to put them in. As such, I stuffed my camera into a small luggage bag and sent it into the luggage bay. Absurdly, my camera was probably worth considerably more than the two machines that were in my hands – but was also well insured.
My plan had been – before I left Robert, to find a luggage shop at the airport and just buy a cheap bag. But alas…. Canberra airport was as bare as could be. The only thing it had was a coffee shop.

Waiting for the plane – with a bit of a snack, and two typewriters.
Getting the machines through the airport and onto the plane was another matter entirely. They both got X-Rayed before I was asked by security to open them up. It was obvious this was more out of curiosity and boredom than anything, but they swabbed both machines for explosive residue. While I was standing there waiting for the result, the woman that had been assessing me (I got swabbed as well as the typewriters) started asking me about the typewriters. She was quite fascinated.
Inadvertently I had to go back out of the secured area and back into the terminal. I had left my glasses on a chair on the other side, and could see them through the glass wall. This subsequently saw me returning back through security again. The smirking little skin-head that had previously been operating the metal detector was now on the X-Ray machine. He called over a Maori chap that was working with him to examine the ‘threat’ of these typewriters more closely. Fortunately I didn’t need to call him a dickhead, because that’s exactly what the Maori chap called him.
I picked the typers off the conveyor and thanked the Maori guy. He gave me a thumbs up and asked; ‘They’re like, old school printers, right’?
I gave him a smile and said “Typewriters, yeah”!
“typewriters, yeah, that’s it”!
He looked away a little embarrassed, so I gave him a “Thanks for that mate, have a good one” and scurried on my way.
A couple of passengers looked at me a bit awkwardly as I shoved the two cases into the overhead luggage. However no one seemed willing to comment. Before long I was on my way back to Brisbane with a plethora of photos, two new project typers to repair, and a very satisfied feeling about meeting a charming, passionate and intelligent man; and his a great selection of typewriters.
….. Also I had a window seat, and was just about to see an amazing dusk light show over the plane’s wing.

Coming up – The fight is on: Scott v’s The Royal.

16 thoughts on “Journey to Canberra – The Messenger Collection”