I’m quite a fan of the scientific inquiry, and all the more if you can add artistry to it.

Earlier today I was sifting through my usual pile of emails. Ms Jane, who is a voracious reader had sent me a handful of typewriter related articles that she had stumbled across while surfing the world’s news sites. She’d been pouring over the goings-on in the world while I was attempting a much more mundane task – the repair of a lawn mower.

With the lawn mower steadfast refusing to be revived with my half educated tinkering, I gave up and sat down to have a cold drink. I flipped open my iPad, and just browsed through the most recent of 1357 unread emails that Google keeps telling me that I have to pay attention to at – some point.

I clicked a link, and there before my eyes was a familiar name and a somewhat familiar face. It was journalist and writer – Robert Neuwirth. A man that is even sexier than me in a lab-coat, and gives me hope that I may still have a chance to look good when all my head hair eventually decides to completely abandon ship.

Even though Robert doesn’t have a typewriter specific blog, deep down he’s one of us typospherians. If you have any doubt about this, you’ll know otherwise by about 3/4ths of the way through the article.

The article can be found here.

The name should sound familiar to you too. Robert helped me find an Apothecary typewriter a little while ago, and quite often posts on the Portable typewriter forum. He also occasionally posts on a few of our blogs, but you may have missed it as he doesn’t draw a lot of attention to himself by pasting his name all over the place.

I’m yet to finish reading Robert’s first book, and I have it set aside at work for times when I need something to read while I’m waiting outside Labs and clinics, or stuck ‘specialing’ a patient.

Oh yeah, Google Robert’s TED talks. They’re worth a look at. Or at least I thought so. I just need to finish his first book, before I work on his second book that is full of material related to his TED discussion.

Robert, the ‘Filthy Labs’ team (which incidentally is just a team of one – me) dips our hat to you.

Speaking of good-guys, here’s an article about how a patent lawyer saved the original paper patent work for a ‘Type-writing machine’ – a piece of history that was scanned into a computer, and then came within a whisker of being shredded and lost forever.

It appears that the US patent office is more than happy to simply destroy the mountain of industrial artwork that they currently find extremely expensive to keep. So, they have computerized their entire catalog and then set about recycling the originals. Many of which are historically significant documents. It appears that no one ever thought to offer any of them to Libraries, Museums or even collectors first.

Some of these pieces of art are potentially ‘da Vinci-esque’ works with their value to history potentially as yet to be realized.

*  *  *
The end of Project FP.
Project FP was my first big overhaul of a typewriter. I had huge plans for this magnificent beast, much of which will now go unrealized. 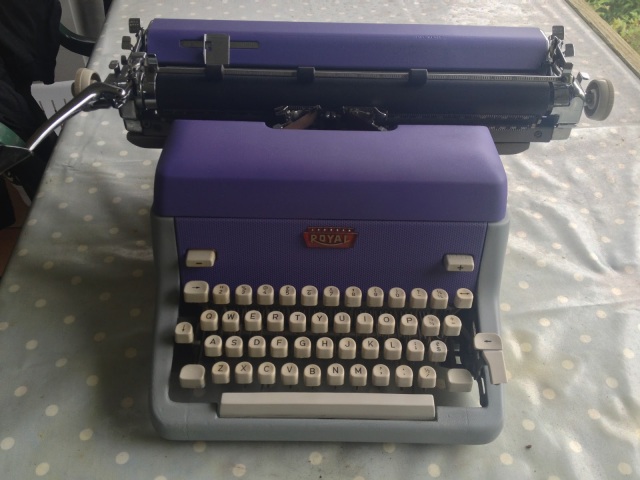 When I received this heavy-weight from an eccentric seller over at Deception bay, it was a dreary battleship grey. Or as far as I could tell with the paint that wasn’t scratched off, or heavily stained. Every key was frozen solid, and the carriage was glued in place – literally. The platen had glue that had been trickled all over it that had made its way into the machine.
Once I had the mechanical side of it moving again, I painted part of it a royal purple – and shifted the grey of the body up a shade to give it a brighter outlook. I also fed a purple ribbon into it.
But then it simply ended up on the shelf. The great plans I had for this machine included copper plating key components, and then using the copper motif to decorate other embellishments. But it simply was too heavy to keep working on – especially when a particularly challenging repair, in the form of an Olympia SG1, was starting to take up any time that I had devoted to working on a heavy desktop machine. 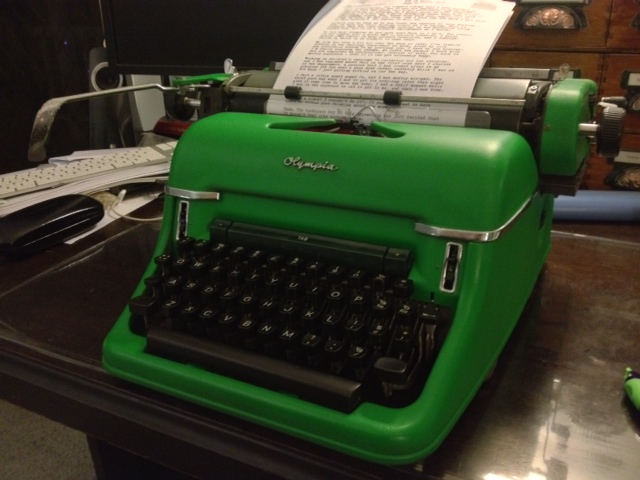 I was running out of room and interest when Rino of  ‘the Long slow {typecast} blog‘ mentioned that he would love to get his hands on a big desktop Royal. At the time Rino was bidding on a beautiful KMM that had appeared on ebay, which eventually went for a price that neither of us would have ever rationally justified. So after that loss I offered him the typewriter that I had personally named ‘The Purple Smartie’.
Rino came and grabbed it last Sunday, and I believe has been ironing out of few of the minor mechanical flaws that I had overlooked since then. It actually is a brilliant machine and I really did love typing on it. It was like firing a machine-gun that had been bolted to a block of concrete. Every letter was slammed onto the page with absolute certainty and speed, and the machine held its footing with steadfast determination that I had never seen before.
Ryan Adney of ‘Magic Margin‘ fame may be pleased to know that this isn’t going to be my last attempt at repairing a Royal desktop machine. I have a Royal HH that is sitting in my shed that is in an even more pitiful state than the Royal FP originally was. I can barely even tell what its original colour was – as most of it has blistered off. Stay tuned for more.
*   *   *
I also have another ‘goings’ to announce. Last Saturday I spread a bit of typer love to another aspiring artist. 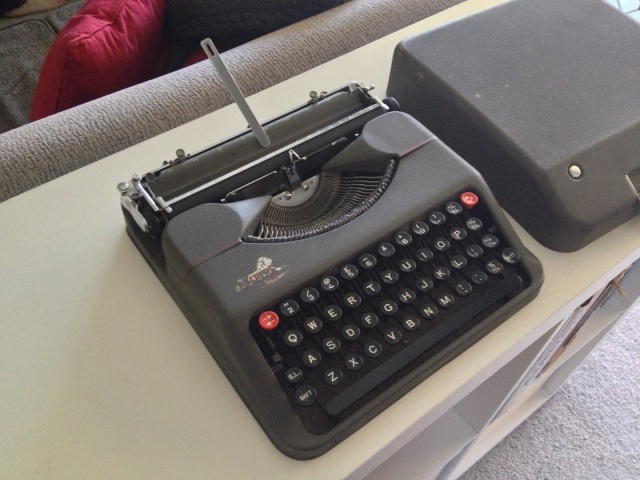 This Empire Aristocrat is now in the hands of a guitarist by the name of Troy. I originally bought this machine as a birthday present for him last year. I serviced it and did some repairs, but held of doing any painting as I felt the worn state of the machine held some beautiful charm. Indeed, I just made sure the ribbon covers closed up properly – instead of bending them into perfect alignment, as I felt that Troy would love the ‘grungy lived-in’ feel of the machine’s looks.
I gave it a new ribbon, but I have a feeling that it had dried out a little in the time it had been sitting on the shelf. I’ll just pick up a replacement for him when I next put in a big order overseas.  Troy however seems quite wrapped in this typer, and I believe he’s been giving it a good beating at home. I think I really have chosen the perfect machine for him, but if he finds he wants something that types better than this Empire, as we all do was we mature in our typing skill, I’ll see if I can dig him up something with a better typing action.
But right now, the ‘beat-poet-cum-grunge’ style of this machine seems to have found a perfect home. It is a tool for an artist – and I’m eager to see what comes of it.
That’s the 4th typewriter to make its way out of my doors now! I really need to start moving a few more before I get buried in projects.
*   *   *
And one final ‘coming’ – just a bit of a teaser really. 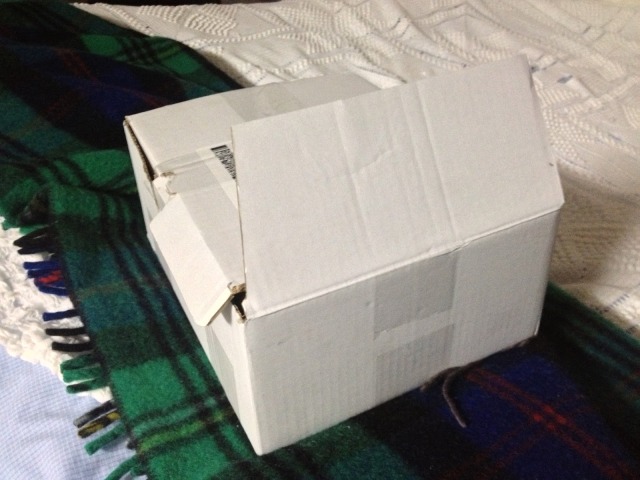 What’s in this box is typewriter related. It may not be of much interest to the typosphere immediately, but I’m excited – as it offers me, and my engineering and CADD skills, an interesting and rare opportunity for the future of many of the machines that some of us have hiding in our cupboards.

12 thoughts on “A big week for the typosphere, and no one knew anything about it!”