Steve and I woke up early again as we were eager to get into Sydney and through the traffic before it became difficult to drive on it’s consistently grid-locked roads. It was a cold morning in Scone, and my car was frosted from cold condensation that had dropped overnight as it hit the nearly 30 degree mark.
I looked out across the road as a coal train snaked its way past the town about 500 meters from the hotel. I felt this seemed particularly odd as it was an Easter Sunday. But I guess the mining industry stops for no one, not even the religious. I’d see several more such trains travelling beside the road before the day was out. 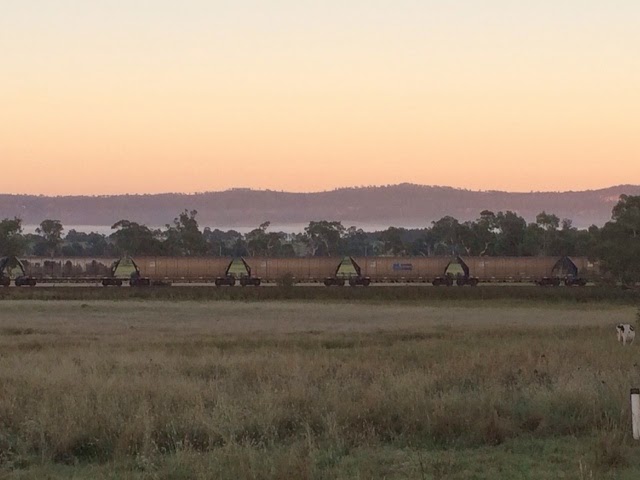 Coal shipping in Scone.
We jumped back into Ruby the Exxy, and immediately there was something wrong. The ‘battery’ light – which is actually the alternator warning light, was on and was staying on. I found a servo to get some petrol, and started to try and assess what was wrong once the engine was warm.
With a couple of blasts of WD40 and a little bit of testing I determined that the alternator was able to produce a healthy charge,  so Steve and I thought we’d just try our luck and see how far we went. I had roadside assistance coverage, so if we did get stuck we’d be able to call for help. As long as we had phone range.
After about 20 minutes there was a loud squeal and a thump, and the alternator light turned off. From that point onwards Ruby drove just as well as she always had. WD40 may have saved the day.
Maybe.
We grabbed breakfast on the road and just kept on driving. It wasn’t long before we hit a brand new dual carriageway that turned the highway to Sydney into a Freeway, and we were soon barreling across the landscape at an uninhibited 110km/h. This was a bit of a shame really, as this new road bypassed many of the most beautiful towns to be found in the Hunter Valley. Instead we ended up having an effortless drive into Australia’s largest metropolis – the crazy emerald city of OZ. Sydney.
Now, I’ll liberally steal from a somewhat failed Australian Tourism commercial when I ask this question: Sydney Typosphere, where the bloody-hell are ya? 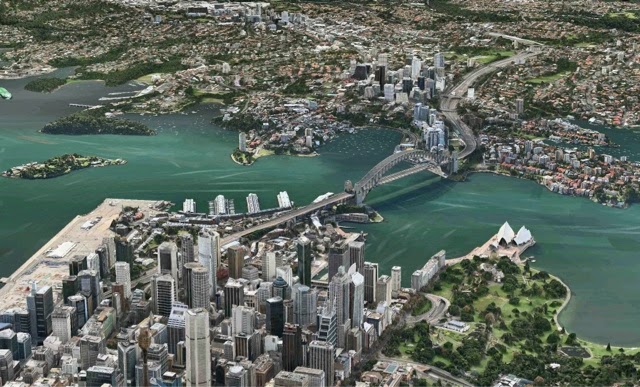 Sydney according to Apple Maps.
Sydney’s population is 4.6 million. Melbourne’s population is 4.2 million. Brisbane’s is 2.2 million (all as of 2011 census). My blog gets several readers from Melbourne, and my blog on Tom’s Typewriter shop constantly gets hits by Victorians checking out information on his shop. So while there’s really only one consistent blogger (see Teeritz Agenda) There’s plenty of users down in Melbourne.
Brisbane also is quite the same. I get a fair few general readers from Brisbane, and as we’ve seen there’s quite a few lively bloggers there too.
Even Darwin and Perth have bloggers. People from Adelaide frequently email me, and they make up a fair amount of the buying and selling activity on ebay. And of course there’s Canberra – which despite it’s diminutive size, appears to be the typewriter writer capital of Australia. I have several consistent readers from Canberra, and not talking about just Rob and Jasper either.
But Sydney? I know of a guy that services machines there, and I know of at least one collector. But Sydney is incredibly quiet. Vanessa Berry, who is listed up in the Typosphere as a blogger is very Zine focused, and I’ve personally never seen her interact with other typewriter lovers. In short, typewriters and the typosphere in Sydney seem to be practically invisible.
My blog also features nil interaction with people from Sydney. No readers, no commenters, nothing. Discussions in forums about hunting typewriters in Sydney often lead to nothing – as though the place is a veritable black hole. I often see machines being put up for sale there on ebay or gumtree, but there’s more in outer New South Wales than there seems to be in that state’s capital.
It puzzles me. With the level of creative activity going on in Sydney, and the size of its population you’d kinda expect to see more writers using their machines and collecting them there. But instead it is a dark patch of sky with only a few stars dimly twinkling.
As it was Easter Sunday when we arrived in Sydney few shops were open. Steve and I didn’t take the opportunity to hunt for typewriters, and instead headed for the Sydney harbor bridge – often known as ‘the coat-hanger’. I popped open Ruby’s roof and stuck the camera out as we crossed the bridge in the hope of getting some shots. They worked out okay, and both Steve and I had fun as we drove across this rather famous Australian landmark. 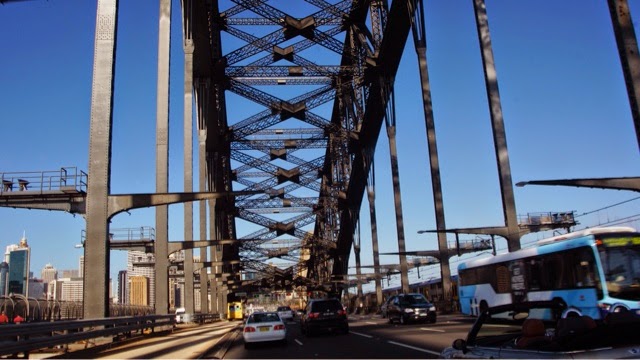 As we drove into the CBD we found ourselves somewhat lost. After doing a few circles we came across a road that was completely shut off from traffic. On that road a large group of people stood waiting and watching the hotel across from them. They were being held back by a temporary steel barrier and a host of Australian Federal Police officers who were controlling the affair.
These people were here to catch a glimpse of the visiting royals. A sign that Sydney does still hold onto some archaic and anachronistic traditions.
Steve and I ducked around the miasma and headed out towards the western suburbs. Ruby showed no sign of failing, so we looked at the map and headed to Canberra and the Australian Typewriter Museum at Rob Messenger’s place.
Not a typewriter or typewriter lover was to be found in Sydney. If you’re reading this and you live there, give me yell as I’d love to see that there’s signs of life.
Steve Snow’s blog, The Impatient Typewriter Mechanic’ can be fond  HERE
Advertisement

4 thoughts on “Sydney Typosphere, Where the bloody hell are ya? (and your typewriters)”