It’s been a big couple of weeks here in Melbourne, and frankly I’m exhausted. A manager of my department launched myself and another co-worked into a 2 week revised workload trial that saw me working 8 of the 14 days till 11pm. All with less than 40 hours to prepare before it started. The bags under my eyes are large enough right now to carry most of my luggage off to a far away destination, and I’m inclined to use them as such.

Sooooooo…… with a birthday coming up soon I decided book myself in for a bit of a trip somewhere with a little help from the overtime I got paid. Now I just need a little spending money while I’m there. So I’ve decided to sell some of the more prized machines I have in my collection; for two reasons – they are currently some of the few that I have out of storage, and while they are a some my personal favorites, they’ll get a bit more money than the usual run of the mill stuff that you’ll see online.

And besides, it may open up some space for me to pick up some more interesting machines to put into my collection. Not that I don’t have almost identical versions of these machines already…. Just not in the same sexy sought-after colours 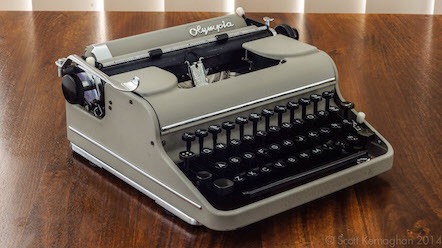 Along with my personal go-to, my SM3 in maroon – which happens to have the freshest platen I have on a machine (not new, but replaced sometime in the last decade or so). 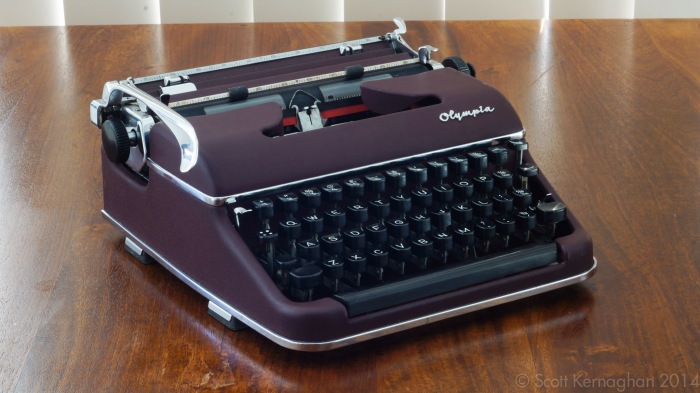 What may surprise a few people is that I’m going to sell my beloved Triumph Perfekt – which I have had for only a handful of months, but have very much enjoyed. 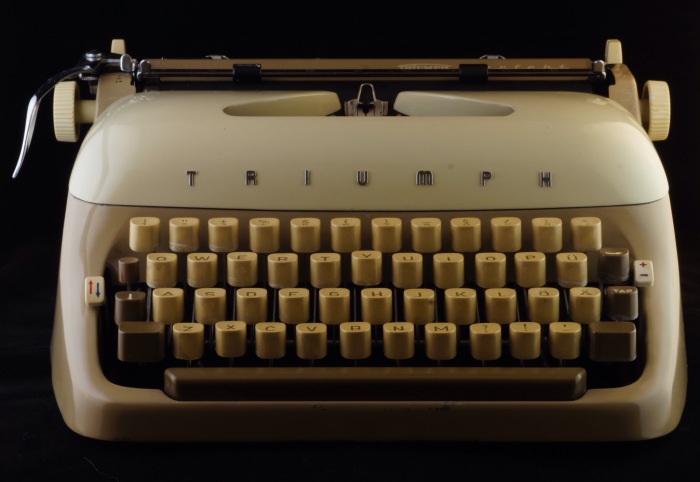 This isn’t because I have been dissatisfied with the machine. On the contrary, I love it. I want more! I have Alder’s and Triumphs of a later revisions that are equally as brilliant to type on, but this machine just has that…. look…. It is beautiful and beastly brilliant to use.

But I have my heart set on another. A machine that was tragically snatched away from me, and which will no doubt lead me to emotional and financial ruin.

Lend my your ears friends while I tell you the story about my great white whale – a.k.a. the great white Triumph. 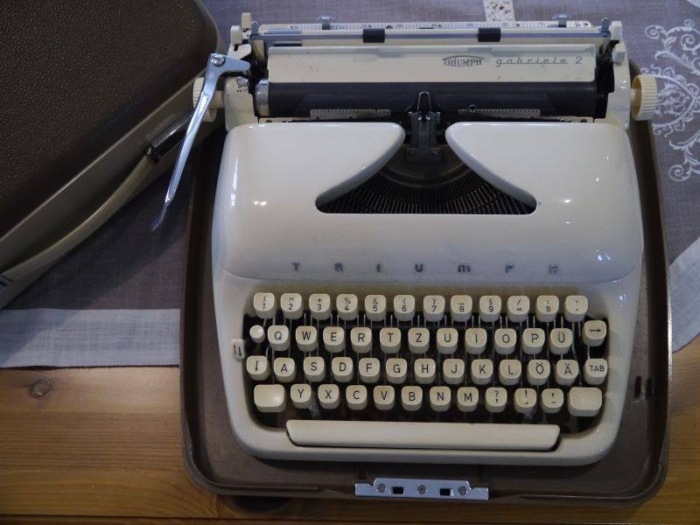 Several months ago I spied this machine late one night while browsing german ebay, casually looking for exotic Erikas and elusive Olympia SM6s. It was there, it was going cheap and it seemed to have gained very little interest. But I just fell in love with those familiar and gorgeous curves and the brilliantly chromed Triumph branding. I just had to have it. I bid, I won, and then had a fight with the seller who instead sold it to a friend locally for a much higher price.

Here was my Captain Ahab moment, and the great while Triumph has since become my Moby Dick. I growled an almighty growl at the screen and hit the complain button. But it was no use, it was gone and it had taken a piece of me away with it. The great white Triumph faded off into the distance and eventually its posting on ebay timed out after 90 days leaving the typewriter never to be seen again.

So I have hunted night and day through Ebay.de to find another, but it has been to no avail. Not even an over-priced rust-filled example of one has ventured before my eyes to be snatched up. The great white wale is to be found no more.

That’s the problem with collecting. Sometimes when you see something it becomes a consuming mission to find it. It becomes an obsession, and nothing else will fill the void until you have the your Triumph.

I will find my great white whale. It may take me thirty years of sailing the internet oceans to find him, but I will find him. I mean… how hard can it be? They must have made thousands of these machines. Surely!

Sadly, not so simple. Finding an Orbis branded SM was reasonably hard, but I have seen even less of these machines turn up on ebay or elsewhere.

So… erm… anyway, yeah. I’m selling a handful of machines just to get a bit extra for my holiday, and I’m not too stressed if they don’t sell. (read this next bit in the voice of some old and cranky british actor) But I… I will find my great white whale – and I’ll do what it takes to find it. He will be mine. (Now in the voice of Mike Myers) It will be mine. Oh yes, it will be mine.

15 thoughts on “Selling typewriters and my hunt for the great white whale.”