I’d finished a late shift at work. It was 11:40 PM and I’d given myself an hour of de-tune time in front of the computer at the end of my workday so I popped onto the Facebook typewriter collectors page. A friend from Austria posted an article about a stolen typewriter, musing ‘Any of you missing one’?

I looked at the photo. It is Royal flatbed 1 with a very distinctive keyboard. The keys are black, but a couple of them are green – very much in the style of some of the Underwood keyboards.

Oh, I have one just like that”, I think to myself. “Glad to see I’m there’s another one out there with a keyboard like that.

“Police are searching for the owner of an antique typewriter after it was found among items recovered, allegedly from a light-fingered thief”

I  check the location in the article. Coburg, Hadfield. Coincidence, surely. Those district/suburb names are UK names too, even if they are the surburbs that surround mine.

I look at the website that the article is posted on; ‘The Herald Sun’ – One of Melbourne’s two major newspapers.

I woke the whole house with a howl of “F**k me”! as it dawned on me. This is indeed my typewriter. I didn’t even know it was missing.

My typewriter had become famous; A broken and partially dismantled machine with its platen knobs arranged weirdly on the ribbon spindles out there on display for the world to see.

This story really starts a couple of weeks prior:

I returned home after dropping a family member to a hospital where they were having some surgery. I hopped online briefly. A friend over in the USA asked me about a typewriter that was for sale here in Melbourne. It’s a good machine that’s massively overpriced but is a brand that wasn’t sold over where they live, and they were eager to get hold of one of these machines. Coincidentally I had one sitting in the ‘clean up to sell’ shelves in my workshop. I offered to sell it to them at greatly reduced ‘mates rates’, then set out to the workshop the find it.

As I unlocked the door to my workshop, I found it hard to open the door. Some boxes were behind it, and I had to slowly force my way in. Once opened I discovered that my workshop had been ransacked. The 200+ packing boxes that we had folded neatly piled in the corner of the workshop now were all opened and jumbled around the workshop. Boxes full of packing materials that I’d saved for use in posting out machines or re-packing when we next moved house had been pulled apart, with the contents of every box, container or bag spilled out and thrown around. The room looks like the box pit from a factory. The entire floor of my workshop was, and still is, chest high in boxes and packing materials.

The deadbolted-from-the-inside door on the other side of the room is ajar. I looked at my workbench. Paintings and other things had been thrown on top of it, but nothing was missing from there. I pushed through the sea of cardboard, bubble-wrap and felt, looking at the emptied shelves across the room. I moved aside a couple of containers laying on top of the muck where they had been thrown but still contained their contents. Looking around all the typewriters that I remembered were in the room seemed accounted for, including the machine I had come to find. But I wasn’t sure. The mess was so great I couldn’t tell. Some machines were still in boxes, and it was going to be a while until I could check everything to make sure the contents were still there.

I called the police. A woman from the crime squad arrived with her kit. She brushed fingerprint dust onto a plastic container that holds my Edison Phonograph. It had been thrown across the room and on top of the pile of boxes, its contents still intact as the lid had been taped on for shipping. A corner had broken off of the container where the intruder had looked inside to see if there was anything of value.

Then the police woman was gone. I stuck the police report to my fridge door with the promise to contact them the moment I discovered what, if anything was missing. I doubted anything was as I could see all my tools were still there and anything of serious value was untouched. I got a call from the hospital that my family member was at, and had to race off. I locked the workshop and haven’t been back since.

It was a week and a half before Miss Jane and I were due to head interstate for the wedding we were frantically planning, so we pretty much left the workshop as it was, with a promise to return to tidy and re-build it when we arrived back.

A few days out from our departure date the article featuring my typewriter appeared on the Herald Sun website, and additionally in the print version of the local newspaper.

I called the ‘Crimestoppers’ phone number as listed in the newspaper the next morning in an attempt to retrieve my typewriter. Nothing. I wasn’t even able to talk to a real person the line was so busy. So I opted to call my local police station, guessing that the staff there may at least know the whereabouts of my machine.

The conversation was strange.

Me: “Good morning. I’m calling about the typewriter I read about in the news. I am confident that it is mine”

Policeman “Oh! That typewriter”! (chuckling) “that thing”! I can hear the smile in his voice.

Me: “That’s a bit of a strange response”

Policeman “Everything about this typewriter is strange”….

My typewriter in on the table in the police interview room.

I arrive at the police station the next day. A detective greeted me at the door with the machine under his arm, politely directing me into an interview room. There are a table and a couple of cheap chairs. We sit down and start talking. I Look at the recording equipment around the room and thought about the kind of conversations that have probably been had in here over the years.

It became clear what the police officer meant when he said ‘everything is strange’ over the phone. The woman who had stolen the typewriter had been stealing from people’s cars. This was the first piece of evidence of a break-and-enter. The police had raided the person’s house just a few days ago, finding the house stacked high will the usual flotsam and jetsam of stolen  items that could be easily hocked on ebay.

There, amongst the hoarder-packed mess of illegally acquired goods, the police found sitting on the dining room table a bizarre looking black machine, clearly old (it is over a century old) and dramatically out of place with everything else in the room.

As any typewriter collector knows, when you have one of these old black machines in a room by itself, it always seems to dominate the room – an impassable object for the eye.

No one could understand it. The machine isn’t light. The woman that had broken into my workshop is well known to the police. She travels on foot as she didn’t have a car, so everything she had, had to be carried when she stole it, all stolen within a limited range from her home.  Adding to the bizarre nature of what had happened, she would have had to have climbed our fence from the demolition site next door to gain entry to our property. How and why did she manage to carry a typewriter of this weight, over the fence that she’d scaled, leaving her unable to carry anything else?

Why a typewriter? what was she going to do with it?

She probably didn’t realize it was broken. The machine had suffered a blow in transit from the USA to my house back in 2013 that had shattered the escapement frame and the carriage lever. I’d been attempting to repair it for a while, with little luck. 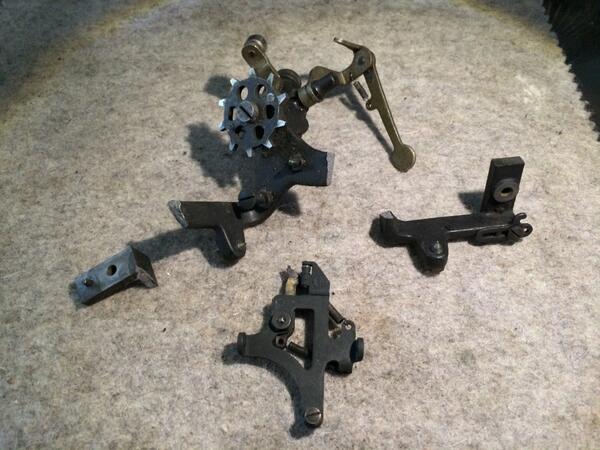 The shattered escapement frame in a temporary jig as I attempted to rebuild it, somewhat unsuccessfully

I’d placed it and its parts in a box before moving from Queensland, packed it carefully, then pretty much forgot about it here in Melbourne. It probably looked attractive because of the careful packing, hinting that it may be valuable, in a workshop where several far more valuable machines were lying partially dismantled on the bench near by.

As I left the police station the officer thanked me. He said that they now had evidence that she had broken into the property and were able to add additional and more serious charges to her arrest. “She’ll be going away for a long time” he replied with a well-practiced cliche. I didn’t even care about that personally. I felt sorry for the her. I imagined the circumstances of her life, and what motivaged her to steal. I see the fallout of their lifestyle in my work at the hospital.  It occurred to me that the police officer says that to everyone as they leave, in a re-assuring but probably meaningless gesture.

I got the typewriter back to my car and checked it over. The parts were a jumble, and a couple are missing. It had sustained some scuffing, but nothing had happened to it that was irretrievable.

Now that I’m back from the wedding, it is time to get into that workshop and clean it up. The last 6 months have been consumed by so many things, and I could have done without this drama. I feel I need to get back onto working on, and writing with, my typewriters.

So if anyone has an escapement from a Royal 1, I think it is high-time I got this machine back on the road. I feel it has earned bing the first cab off the rank when I get back into repairing.

5 thoughts on “The Tale Of The Stolen Royal.”